An excerpt from KISS ME SLOLWY

A little taste of my romantic suspense novel, Kiss Me Slowly, now available at amazon.com, barnesandnoble.com, Amazon(ALLcountries!) and Bookstrand.com. 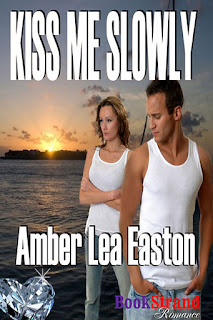 He was beyond pissed at this guy’s audacity. His perpetual shadow leaned against the front of a closed dress shop, Panama hat pulled over his eyes, arms folded across his chest, and watched the office door without bothering to stick to the shadows. “Look at him standing there, not even bothering to hide.”
“He’s been skulking around here all day. I think he’s harmless.”
“He’s following you now? That can’t be good.” He pulled her closer to his chest and into the darkness of the entrance.
When she sighed, her breasts heaved against his arm. He cursed every inappropriate thought that rushed through his mind. No time for sex with an ex. This situation didn’t exactly scream romance.
“You weren’t kidding about being trapped in some B movie, were you?” She twisted against him in an attempt to break free of his hold.
“Stop it.” All of her gyrating distracted him from Panama Hat Man.
He broke off his words when she bent his wrist backward until he thought it would break. Cursing under his breath, he released her and rubbed the pain in his left hand.
She stalked across the street toward the man, slippers slapping against the pavement, hips swaying beneath the thin cotton dress that skimmed her thighs, and hair bouncing against her bare back.
He would have chased her even if she weren’t potentially following a psychopath.
Panama Hat Man walked toward the beach, his stride quickening with their approach.
“Wait. Stop. I need to talk to you.” She disappeared down the path leading between the buildings to the beach.
“Grace, come back here.” He jogged toward the path, panic just a breath away from consuming him. He glanced over his shoulder as he ran, conscious of the unlocked building but concerned about Grace’s safety.
Night slowly overtook twilight. Lights from the sidewalk cafes and bars illuminated the street at their backs. Only a handful of people strolled the beach at the waterline in the distance. He watched her jog over the sand, getting further away from the streetlights.
Panama Hat Man disappeared.
“This is a bad idea, Grace,” he said when he caught up to her.
“This whole thing is a bad idea. I don’t need this drama.” She shouted the words over her shoulder as she paused to yank the slippers from her feet. “I quit. Done. Finito.”
“And you think I do?” He grabbed her elbow. “I don’t want you to quit, just stop following this guy. You could be walking into a trap. Maybe he wants you to follow him, ever think of that?”
Of all the qualities she had to retain as an adult, it had to be recklessness. So much for the sophisticated, calm, I-have-it-all-together façade.
A piercing pop sliced through the air. Sand exploded at their feet. Another shot—definitely gunfire.
He pressed her to the ground as another shot went off. His hands covered her head while his body shielded hers. A brief scan of the horizon showed nothing except sand, strangers running in the opposite direction of the shoreline and the blackness of the ocean.
“He’s shooting at us?” she asked against his neck, hands fisted in the material of his shirt.
“Still think I’m paranoid?” he asked against her forehead.
“I quit, I really do quit.” Her nails sunk into his shoulder as she clung to him.
Another pop sliced the air. Strangers screamed. Someone yelled for the police.
Searing pain ripped through his left shoulder. Rolling from her, he half-crawled half-pulled her further into the darkness and in the opposite direction of the Panama Hat Man.
He kept his head down and tugged her away from the lights.
“You think you’re being followed so you drag me into it, thanks a lot.” She stumbled in the sand next to him, bringing him down with her. “Brilliant plan.”
In one move, he hauled her to his side and ran until they stood in the shadows beneath a lifeguard tower. Chest heaving, he shoved his hands through her hair.
“Are you okay? Are you hurt?” he asked, gaze scanning her for any sign of injury.
“Stop touching me.” She slapped his hands away, eyes snapping with fire. “My life was complicated enough, Jon Ryan. I didn’t need you making it worse. Damn you.”
“You had to follow the guy, didn’t you?” Rage at the situation at large zeroed in on her. “For being a so-called genius, that was an idiot move.”
She punched him in the shoulder. “Who is this guy? Why is he shooting at us?
Pain ripped through his left arm and burned down his back. Sharp, burning pain. “If I knew the guy, I’d kick his ass. Stop hitting me.”
She held her fist up to her face and studied the blood that stained her fingers. “You’ve been shot,” she repeated several times before lifting her gaze to his. “Why the hell didn’t you tell me you were shot?”
“I didn’t know.” He rested the back of his head against the stilt in the shadows of the lifeguard stand. He needed clarity. This entire situation had escalated far beyond his scope of comprehension. None of it made sense.
“How do you not know that you’ve been shot?” She rubbed the blood from her hand over the front of his shirt while looking down the beach and toward the shadows with extra-wide eyes. “I lost my slippers. They’ll look weird on the beach, won’t they? Not many people live on this block, especially not so close. The police will make the connection.” Eyes overly wide and chest heaving beneath the thin cotton material, she pressed her hand against his arm and stared up at him. “Jonathan, we’re out of time.”
Coldness seeped through his bones. Someone had shot him, but he knew instinctively that Grace had been the target. She had the ability to prove his innocence. Someone wanted her out of the picture.

Book Blurb
Neck-deep in a setup that could have him in jail or dead by Monday, Jonathan Alexander is desperate. It's Saturday. His only hope is Grace Dupont, the best forensic accountant in Miami. But there's a glitch with that idea. She is also his ex-girlfriend who would rather watch him drown than throw him a life vest. Grace enjoys seeing Jonathan squirm. On your knees, boy, she thinks as he pitches for her help. Always a sucker for the dark-haired, blue-eyed boys, she risks her precariously balanced life of secrets to help him. Trapped in whirlwind of diamond smuggling and million-dollar money trails, Jonathan and Grace flee to the sea to stall for time as they try to prove his innocence. Romance sizzles beneath Florida Keys sunshine. Both scoff at happy endings. Both doubt justice. Both know each kiss could be their last.