Today on "Open Mic Monday" I'm featuring fellow Siren-Bookstrand author, Cait Reynolds (aka Fiona Blackthorne).  Her new release, Moonstruck, will be available on bookstrand.com in February!  Make sure to mark your calendar for that because it's certain to be a page-turning-so-hot-you-need-a-cold-shower read! Woot!  Yay, Cait slash Fiona!
Celebrate her success by staying up-to-date with her at  http://artifexamor.blogspot.com
Sexy Little Bits: Why Lingerie is Important
By: Cait Reynolds
Admit it. You have them.
The used-to-be-white-now-kinda-grey bras that are super comfortable but look like they belong in a 19th century London workhouse. The cotton panties that are pilling or the stretchy ones with the elastic starting to pop out like fringe.
Shall we peek into your drawer of night things? Ah yes. The oversize t-shirt. The raggedy-ass flannel pajamas. The hideous floral faux-satin nightie that you never wear.
We shall give socks and stockings a pass because nobody wants to wear a garter belt or thigh-highs every day, and frankly, they come off pretty quickly with the pants/skirt/shoes thing.
Ladies, 2012 is upon us. This year, make your resolution to go through your underwear and sleepwear and freshen things up…and maybe liven things up, too!
I just did this at the end of 2011. I didn’t think it would make that big of a difference. I just needed some new stuff because my old stuff was getting really…really…bad. But then, as I was shopping, I began to see how cute some of the bras and panties were. I began to think obsessively about my lingerie. I went home, I dug through my drawers. I couldn’t find one bra and panty that matched. I had practically no sleepwear to speak of – what I had was usually cobbled together from workout clothes.
Something inside me snapped.
I had avoided buying pretty things because I had gained a lot of weight after my kidney transplant five years ago, and though I’m finally stabilized medically and am starting to lose weight, I felt pretty bad about my body image. I didn’t deserve pretty, sexy lingerie. It was best that I just wear utilitarian, economical, plain things until I could be fabulously fit and thin again.
Well, that shiznit was all over. Lingerie is what you wear closest to your skin. If you don’t feel good in that, how will you feel about the rest of the way you look? It’s kind of like my rationale for cute shoes: shoes are what we touch the earth with, what we take every step with…if you can’t do it in style, then what’s the point?
Now, I am a starting-out writer. I am not rolling in anything except plots. I don’t have a lot of money to spend on Agent Provacateur or La Perla (though someday, I will treat myself!). What’s a girl to do, then?
Target, Marshalls, TJ Maxx and Kohl’s.
The strategy? One cute bra and 3 panties to match. It’s really cost-effective, as the panties are always so much cheaper than the bra.
I dove into color with luscious pinks, rich purples, and fiery red. I also indulged in some blacks, greys and creams. There were ruffles. There was lace. There were little ribbons. The first time I wore my new little lacy bits under my clothes, I felt like a million bucks. Every outfit looked different and better, and I realized it was because of the way I was carrying myself with more confidence as a woman as a result of some upgraded underwear.
Cool, non?
Oh, I kept some of the old grungy stuff for working out in, and so far, I’ve been very good about only wearing it for that.
For sleepwear, I did invest in a few pajama bottoms and cute little t-shirts, but I also found some adorable things at Target with Josie Natori and Gillian O’Malley. Little silky teddies and boy shorts with lace. Spaghetti straps and ribbons. I am one happy girl when I go to bed now.
Did I mention that my husband approves?
So, ladies, make 2012 the year you burn your OLD bras and step out in style – even if you’re the only one who can see it. 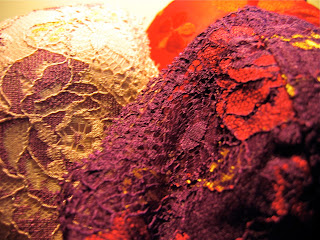 “Moonstruck” by Fiona Blackthorne (aka Cait) is coming in February 2012 from Siren-Bookstrand Publishing!
Ava Bell wants a quiet month in Blue Moon, Maine. What she gets are Robert, Declan and Sean Molineaux who seduce her body and soul into darker pleasures. When an old evil threatens her new love, can Ava find the solution to a centuries-old mystery?
Learn more about Cait, her writing and her zany misadventures at Artifex Amor – http://artifexamor.blogspot.com
Posted by Amber Lea Easton at 11:24 AM

Thanks again, Cait, for guest posting on my blog. Your insights are dead on!