Today I welcome author Diane Schochet to “Open Mic Monday”...and, yes, I know it’s Friday.  I’m breaking the rules a bit over here on Kisses, Caresses and Whispers in the Dark.  So, with reckless abandonment, let’s welcome Diane as she introduces us to her novel, COG STONE DREAMS.

Doctor Claudia Alexander, my publisher at Red Phoenix Books, says COG STONE DREAMS is Environmental Literature because it features estuarial wetlands.  Amazon.com puts books about estuarial wetlands in their lakes and ponds category.  Today COG STONE DREAMS is number 19 in best-selling and number 2 best rated in Kindle lakes and ponds category.
I say my novel, COG STONE DREAMS, is a mystical, magical, humorous love story with a murder, 9000 years of history, Jewish themes and estuarial wetlands thrown in.  Read my description and excerpt and decide for yourself.
On September 14, 1947, when Dessa, the main character, was ten, her father’s Dodge broke down on a Southern California coast road between the Westbruk Wetlands and Cardboard Beach.  That day Dessa explored the beach, witnessed what may or not have been a bow and arrow murder and bought a dream inducing cog stone from a homeless boy named Leo.  That night she had her first cog stone induced dream. All her dreams took place at the Westbruk Wetlands and Card Board Beach. Leo, the homeless boy who sold her the cog stone, was in every dream.  Like Dessa he gets older.
It is now 1957.  Dessa is twenty and engaged to a Mister Perfect named Micah.  How perfect? Micah is kind, smart, handsome and rich. He adores Dessa.  They are at a sorority dance.  Micah has excused himself to go to the restroom.  Dessa is sitting on a metal folding chair.
An excerpt of COG STONE DREAMS...
My right foot fell asleep. I stretched it to stamp out the tingles and kicked a white sock inside of a large brown, scuffed, loafer.
“I’m sorry,” I said to the sock and shoe, then looked up to the face the shoe and sock belonged to and jumped.  I was looking at Leo, the boy I had met on Cardboard Beach when I was ten.  The Leo who’d sold me my dream inducing cog stone. The Leo I dreamt about.  “Leo?”  I said.
“Do I know you?”  He smiled the same crooked teeth smile.
“We met when we were ten,” I said.  “I was ten.  I don’t know how old you were.  How old are you now?”
“Twenty-two.”
“I was ten and you were eleven,” I said.
“Vas it in the orphanage or the school?” He seemed to have an accent or speech impairment.
“It was on the beach,” I said.
“When I was eleven I never went to the beach,” he said.
“You’re a liar,” I said.
Instead of arguing the point, he asked me to dance.  A Strauss waltz was playing on the record player and I walked into the arms of a man who knew how to waltz.  He had on cologne or after-shave lotion, I’m not sure which, and his breath smelled minty. 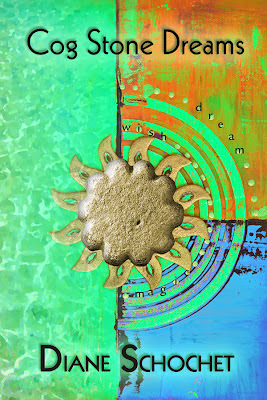 At the end of the dance, people clapped for us, we bowed---.
Available in both paperback and ebook from Amazon, Smashwords and Barnes and Noble.

what a beautiful cover! (grins)