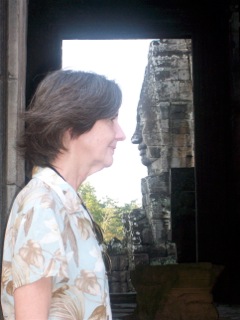 My dad was a magician (stage and slight-of-hand, with a day job ). His family was from the Isle of Man and came to the Northern Appalachians to mine coal. I was a shy, only-child, with sleep problems who liked to read. Very few people these days have the privilege of being so isolated. It made for an enchanted life. I used to lie in bed at night listening to a distant train whistle imagining what the world was like. We didn’t have very good schools so my reading was unguided. Words and pictures from books clashed and merged with experience. I was told at a young age that I couldn’t distinguish Reality from Fantasy.
I did try to fit in when I was a teenager--don’t we all? But alas, I’m not good at being anything but me. I kept reading and moved to New York City. I went to graduate school, traveled, waitressed, worked in a factory, as a welfare worker, cataloged tribal arts for Sothebys and volunteered in Margaret Mead’s office and the Planetarium. I discovered that a lot of folks have difficulty telling Reality from Fantasy and choose to believe some outrageous things. It doesn’t matter as long as those beliefs don’t hurt anyone. Life is complicated, and hard at times, but there’s no reason it can’t be enchanted.
I’ve had stories published in fantasy magazines, e-zines and anthologies. I helped create The Toxic Avenger and wrote screenplays for parts II and III. The biggest criticism I get is that I don’t fit into any category. It’s the story of my life and I’ve learned to take it as a compliment. “Meeting the Dog Girls” is a collection of short stories. There are scornful fish, time prisoners, haunted icons, magicians and marbles. There are glass men, bronze men, backward men, monks and generals. There are goddess, witches, the reincarnated and, of course, Dog Girls. Dog Girls are mysterious and often outrageous. They stand by their children and friends; they stand up for, and to, their men.  They’re the sort that put a playing card in the spokes of their (life)cycle to hear the noise. You may be one (even if you’re a boy). Mercy Grace (the waitress in this story) is an aspiring Dog Girl...

An excerpt of MEETING THE DOG GIRLS...
Every Saturday morning the Dog Girls met at Ory’s Diner for an early breakfast.  They told rambling stories and laughed a lot.  They talked about hard times, tedious husbands, weather, crops and how to take care of day to day stuff.
“For that kind of nicker, I’d check the carburetor, “one of them said once—they took good care of their cars and trucks.
“You don’t get much benefit out of medicine if it tastes good.”
“How often do you give that old dog Pepto Bismol?”
“Men are best at being grandfathers and brothers.”
“Ain’t it the truth,” I’d say as I set their plates down in front of them.  “Fellas around here treat you like you was dirt one minute and then expect you to sleep with them the next.”
They talked about their animals a lot.  They treated them like people, with respect and affection, and treated people like children, with patience and kindness toward the nice ones, and sternness toward others.  Some folks, like Sam Ralston, they totally ignored.  Sam is a local trucker and he was always trying to hit on the Dog Girls, but they acted as if he wasn’t there.  Sam didn’t actually notice because he really wasn’t all there anyway.  They openly flirted with Ory’s boy, Alfie, a shy 15 year old who came in to bus for us on the weekends.  The flirting was all very innocent, meant to give Alfie some confidence.  Everyone admires Dog Girls and all men desire them, whether they admit it or not, so it sure gave Alfie a reason to hold his head up.
I have to say that they gave my soul a flutter also, feeling swallowed up by them hills and like I was never gonna see anything of the world outside before the Dog Girls come into Ory’s.  I am the youngest waitress at Ory’s, just 25 last birthday.  I got the job when Lully Kemp ran off with that trucker from Kiski.  It was the biggest scandal around here since Millard Harden shot his wife and boy on Easter Sunday 1975 down by Hedgy’s Run. 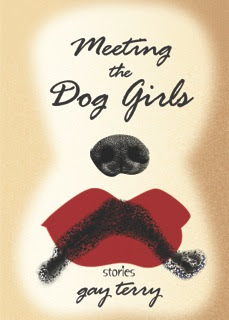 Dog Girls wore combat boots with a hole drilled in the heel through which they threaded their laces.  Waitresses, like me, wear light comfortable shoes—sneakers or old oxfords.  We wear support hose and still get spider veins (or worse) by middle age.  I admired the Dog Girls so much that I went out and bought myself a pair of combat boots to wear on my days off when I went to help my grandpa.
“Look at them boots,” he said to me the first day I wore them.  “You could walk through a swamp in a thundersquall in them things.”
I loved the confident whomp they made on his wood floor.  I was so much more substantial in them.
I take care of my grandpa because he took care of me after my folks died when I was seven.  They hit a patch of black ice in an old Chevy and flew off Three Mile Hill like a eagle with headlights. Actually, grandpa took care of me a lot before the accident too.  He made my peanut butter and banana sandwiches for lunch.  He bought me a sled one Christmas, and a new pair of shoes every Easter.  He put vinegar on my bruises. He tried to teach me how to juggle.
At first, folks around here said that Grandpa was unequipped, set in his ways, too dogged to raise a child.  He was always early and his stuff was always redd up, whereas I’m late a lot and naturally messy, my bra strap shows, my hems come out.  Grandpa was very strict with himself, but not so much with me.  I tried hard to live up to his standards, but I’m not much like him.  He loves me anyway.  Folks finally came to see that, and left us alone.
available at:  http://www.amazon.com/Meeting-Dog-Girls-Gay-Terry/dp/1933065303/ref=sr_1_1?s=books&ie=UTF8&qid=1315961298&sr=1-1
website:  http://www.gaypartingtonterry.com/
another excerpt:  http://nonstop-press.com/?p=1964
interviews:  http://wwwthouhtfulreflections.blogspot.com/search?q=gay+partington+terry
http://shelaghwatkins.wordpress.com/?s=gay+partington+terry
http://nonstop-press.com/?cat=10
Posted by Amber Lea Easton at 12:03 AM

Thank you for sharing. This story is well written and down to earth...I could listen for hours.