Today on Open Mic Monday, I'm excited to host romance comedy writer, Vonda Norwood.  A multi-published author, she's about to release the first book in a twelve book erotica series entitled "Alison's Diary (The Knowing of Me).  Book One in that series is entitled, "The Door on the Left" (coming soon).

Her two sexy romance comedies are getting multiple five star reviews on Amazon and are highlighted below:

"Facebook Breaks Up Marriages.lol": a romantic comedy about a woman who spent three years depressed and repressing

all thoughts of romantic and sexual desire until the innocent mentioning of a name from her past wakes her up and sends her on a hilariously determined path to communicate with the one man she believes herself to be sexually obsessed with. 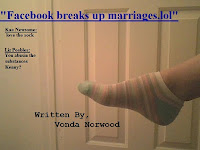 When I gave in and allowed John back into the house, I made sure that he and I never shared a bed again. To protect my children from what I knew would more than negatively effect them, I allowed myself to play house. The only thing different, was that I pretended that John wasn’t around. Wasn’t hard to do. He could care less to associate himself as a father with his children and I could care less to associate myself as a woman with a giant ass-hole! As the days and years of my pretend ‘house’ life went by, I associated less and less with anyone and everyone - except my kids. That day on the phone with my brother, when he mentioned Kenny’s name, Tom was actually just trying to get me to associate myself with my own brother. He called and told me that I needed to start living again and then he said, ‘remember when?' And boy did I!..

"Indie Authors Make Better Lovers": This is a sexual comedy. Norwood wrote  about what it's like to be an inexperienced tweeter learning how to promote her book on Twitter.  This is first-person and autobiographically written. She put her true self as the main character and told the story of her own sexual fantasy.

It's all there for me...The exhilaration of my heart racing, chills running through my body which are causing my nipples to redden as they become tightly erect. Yea, I'm like chameleon. As my breathing slows, my pink lips swell and as they swell, their shade darkens too. Everything pink, is now becoming more and more bright red. My body brightening up like a visual effect to alert a male of my sexual readiness. All of this happening in a matter a seconds! Brought on by the intense pleasure of my own arousal, which is be fueled by my sudden need to go to him and accept this offer of himself to me. He is here with one purpose and one purpose only. I know it and he knows it. And his purpose of being right here, right now, is to unselfishly satisfy the intense craving that I have to experience pleasing him.

Thank you for taking time out to host me and let the world know about my works!!!
You're a kind and generous person!!!
:-D