Please welcome fellow Siren-Bookstrand author Jessica Lauryn to Open Mic Monday. She's talking about one of my favorite subjects--romantic suspense writing.
Her latest novel, Dangerous Proposal, was just released June 5th.  I'm sure you'll want to be one of the first to read it after sampling the excerpt below.
Drum roll please...cue the spotlight...welcome Ms. Lauryn to center stage!


Dark heroes.  Mysterious Pasts.  Family secrets, diabolical plots, and forbidden attractions.  Just a few of the elements I love so much about the romantic suspense genre!  In fact, it was several of those very things that inspired what would become my first, and later, my second novels, Dangerous Ally and Dangerous Proposal.
In the Pinnacles of Power series, which is a five book series in progress, centered around a diamond smuggling operation called Project Gemstone, the heroes—Ryan, Alec, Colin, Lucas, and Jack—must battle their inner demons (in many cases, their obsession for power) as they struggle to become a heroes of their own right.  The heroines—Abigail, Lena, Julia, Lilah, and Corrinne—are strong and independent women, each of whose lives are thrown a major curve upon meeting a man, their dangerous attraction to which, threatens to turn their very lives upside down (and does!)  I just love to throw my heroines into danger, particularly when that danger brings them straight into the arms of the man they secretly love!
As both a reader and a writer alike, I know it’s those edge-of-your seat moments that make me not want put a book down when I get to the end of a chapter.  I live for cliffhangers, and I know that my characters live for them too.  It’s what makes things exciting—that steamy kiss the heroine didn’t expect to receive, or bit of news that throws everyone into turmoil, the heart pounding moment when you realize an assumed friend is actually working for the enemy, and has a gun pointed at the hero’s head!  Building to these moments is what keeps me reading—and writing!—stories in which you never quite know what’s coming next.
Truly, the only thing more fun than reading a great romantic suspense…is writing one!  It can sometimes be as much of a mystery figuring how to put the pieces of the story together (for me, the writer,) as I imagine it is working through a challenging series of events for my characters.  It’s all about giving away just enough to tease, but saving the twists and turns for the most unexpected moments—something I have a lot of fun doing.  I’m a plotter, (both by nature and by choice) meaning I have to lay out pretty much the entire plot of a story out before I can start actually writing it.  I think this is very helpful in writing romantic suspense, because   you get a good idea of where the story is going ahead of time, and you can later work out the finer details.
Mysteries, like any great genre, take a lot of thought and careful plotting.  Lucky for those of us romantic suspense junkies who write them though, there are few things we enjoy doing more than spending hours thinking all of those twists and turns through! 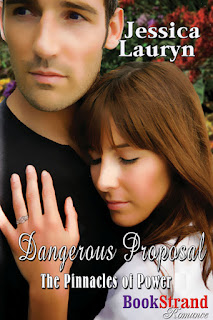 Dangerous Proposal Excerpt:
Alec smiled. It was oddly thrilling to hear that she had gone to so much trouble to gather information about him. Even if it was only part of a plan to take his life.
“You broke into the private office of a doctor because you were curious? Of course it means nothing to you that my diplomas are hanging around the room. Tell me, Lena, what is it about me that’s gotten you so curious?” He put his hands at her sides, pinning her in place. “Had I been in the same position as you, my dear, I suppose I might have been just as tempted. I am a rather fascinating subject matter, aren’t I? But I guess that’s just the difference between you and me. I have something called ethics. A good thing to have when you’re in my line of work.”
Alec found himself regretting his last statement. Why did she have to look at him that way? What reason could she possibly have to be hurt? “Lena, I—”
“You have the nerve to lecture me about ethics? You lure me into a hallway, kiss me against my will, and you have the nerve to say I’m unethical? Perhaps you ought to be looking in the mirror when you say a few of these things, Dr. Westwood!”
“Perhaps I should.” His voice rose. “But I’m not the one investigating people. Am I?”
“Investigating people?” She blinked.
Alec drew a breath. Not only was she an excellent liar, but he never dreamed he’d succeed in getting her as steamed as he was. He wondered if she was equally aroused.
“No, of course not.” He leaned in close. “A sweet, innocent woman like you investigating a dark scoundrel like me? You and I both know that’s not what’s going on here. Don’t we, Lena?”
“What do you mean?” Her hazel eyes sparkled with question.
“You play it like you’re so naïve. You play it very well, in fact, but you and I both know it’s just an act.”
“An act?” She bit her lip. “I don’t know what you’re talking about.”
He ran his fingertips down the length of her sleeve. “You know exactly what I’m talking about. The way you become so flustered every time I get close to you. You try to hide it, but it’s written all over your pretty face. You weren’t satisfied by our last encounter, and you thought you’d come over here and try again. Only this time”—he looked into her eyes—“I believe you want more than just to be kissed.”
“Who the hell do you think you are?” she demanded, fighting to slip free of his grasp.
He held her in place. “You’re a smart woman, Lena. If you didn’t want to be here, you wouldn’t be. Go ahead. The door’s right there.”
Alec bit his tongue. He’d definitely gone too far with that one. He’d all but offered her a way out. Releasing her, he watched and waited. But to his astonishment, Lena didn’t move.
A smile crept upon his lips.
She wanted him. Wanted him as much as he did her. There was no denying that now. She wanted him, and he was going to give her exactly what she’d asked for. Not to worry, my sweet. No reason for either of us to be ashamed about something we both want so much…
He brought his face to hers so that their lips were almost touching. But he didn’t kiss her. Not yet. Lena believed she didn’t want him, thought herself immune to his charm. He was going to make sure she knew exactly how much she wanted to be there.

Want more?  I know I do!  Dangerous Proposal is now available direct from the publisher in all ebook formats at http://www.bookstrand.com/dangerous-proposal.

But let's not forget book one of the series, Dangerous Ally (an excerpt coming next week), available in ebook and paperback from Bookstrand, Amazon and Barnes and Noble.