Today I'm thrilled to host author Jo Linsdell who's breaking down Google+ for writers like me who simply don't "get it". 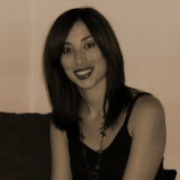 Google Plus for Writers
By Jo Linsdell
Google+ launched in June 2011 and became the fastest growing social network in history when it reached 25 million users in less than 30 days. It's continuing to grow at a rate of about 600,000 users a day and is estimated to reach over 400 million users by the end of 2012.
Whilst you're probably thinking "great ANOTHER social network, isn't Facebook, Twitter, LinkedIn etc... enough?" Google+ has some great features that make it ideal for writers.
Circles
Google+ doesn't have friend lists like the other social networks but instead allows you to create and be added to circles. You can add people to more than one circle and have as many as you like. This means to can easily sort people into different circles e.g. bloggers, book reviewers, freelance writers, authors, publishers etc...
When you post or share something you can then decide which circles will be able to see it (or make it public- which can be viewed by everyone on Google+ where they're in your circles or not). This means you can create specific content for each audience and really target your interactions.
You can also follow circles that other people have created which makes following topics and industry leaders easy.
Hangouts
Easily the most powerful feature on Google+, hangouts are LIVE video chats. This simple video conferencing feature means you can start an event with just a few clicks and invite people to join you.
The potential of hangouts is huge especially as you can sync your event to upload directly to your YouTube account meaning you can broadcast in real-time both on google+ and YouTube and share on other sites. You can even embed the video of your hangout onto your website or blog.
You can create a hangout to connect with your readers, for video author interviews, for a face-to-face with your editor or for a chat with your critic group. The options are endless.
On 31st July I'm going to be doing a hangout as part of my promotional tour for my book 'Out and About at the Zoo'. You can find more information about it here. 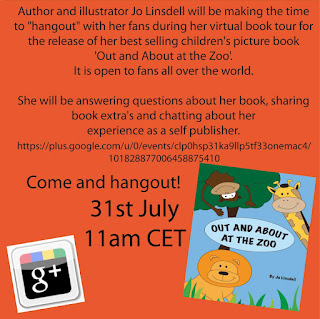 Sharing
Unlike it's competitors, Google+ doesn't seem to have a limit when it comes to update length which means you can add a simple one sentence update or a full length article including images. This means you have much more flexibility over your updates which combined with the ability to target circles makes it a very powerful and useful feature.
Google+ is also strongly linked to Google search results and having an account offers several benefits including being able to add Author tags to your blog.
If you haven't already, it's definitely worth checking out. Feel free to add me to your circles ;)

Jo Linsdell is the author and illustrator of the rhyming children's picture book OUT AND ABOUT AT THE ZOO. Find out more about her at www.JoLinsdell.com 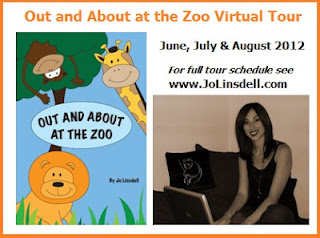 Email ThisBlogThis!Share to TwitterShare to FacebookShare to Pinterest
Labels: authors, Google+, Jo LInsdell, Out and About at the Zoo, writers, writing advice, writing tip

Great tips, Jo. I'm still a bit in a fog about the circles (I understand in theory what they are, but when I'm over there I have no idea how to expand mine), but you've definitely lit the beacon in the lighthouse. Thank you!

Thanks for hosting me again Amber.

I'm only just starting out on Google+ but it's potential is huge.

The circles feature is really useful. For example, you can create a circle of publishers. When you come across a publisher on Google+ you just add them to that circle. When your manuscript is almost ready you can then let all the publishers know and maybe give a sneak preview. You can also follow what each of them is up to so you know which ones will fit your book best and who is accepting queries.

Hangouts make it easy to organise a face to face meeting with them too to discuss the project.

This is just one example but you get the idea.