Today I'm thrilled and honored to host YA author, Sands Hetherington, as he discusses his views on the writing craft.  Enjoy and please comment below.  We'd love to hear your thoughts as well. Welcome, Sands! 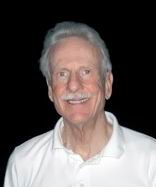 Hi Amber, good of you to have me.  I'm glad you call it a craft, because that's a more useful term for this discussion than "art."  In English anyway.  You probably know the Greeks made no distinction and used the same term (techne) for poetry, cooking and lamp-making.  Be that as it may, craft is an easier term to handle, and a craft by definition can be learned if you have the aptitude.  Not everyone has the aptitude for writing, of course.  Not everyone has the aptitude to be a chef or a professional athlete either.  But if you do have it, there's a lot of stuff out there to pick up on.
I think the biggest thing is to read.  You can't write good books unless you know good books.  Read them all twice, and read mediocre ones too so you know the difference.  You can't get something out of nothing, and nothing is what you've got unless you dive into the literature.  Who was it that said, "Good writers borrow; great writers steal?"
The second biggest thing is scheduling and dedication.  Writing is a lonely and often tedious business and you've got to want it and go after it.  Make a writing schedule and stick to it no matter what happens and how rotten you feel that day.  Don't try for eight hours.  No successful writers I know work eight hours.  (Or unsuccessful ones either.)  It's just too exhausting, and if you try it you will probably quit.  Two, maybe three hours should be enough.  Never stint your two or three hours, though.  Mark Twain said it: "I hate writing.  I love having written."
And while we're leaning on authority, I like something Hemingway said also.  He said stop for the day at a spot that will be easy to start from tomorrow.  And read everything you've got tomorrow before starting so everything will be of a piece.
I like to do about five hundred words a day and do it straight through.  I get in trouble when I start trying to do a line at a time, that is, getting the line just-so before going on to the next one.  This hurts my flow (from the reader's point-of-view) and wastes time.  I try to do my five hundred words without looking back, and then take fifteen or twenty minutes to clean things up.
Finish the piece and then rewrite and rewrite.  You need to stop this at some point, but err on overdoing it.  Get lots of criticism from good people (they don't need to be pros).  Have a thick skin because you're going to take a lot of flak, some of it undeserved.  When you get stuck, get a little notepad or recorder and go for a walk.  Dickens used to do this late at night in London.  I know it loosens my thoughts up.  Keep your antenna out at all times.  You never know where good material might be coming from.  I got the idea for my present book while putting my little son to bed.
But, hey, who on earth am I to say?
And thanks again for having me.
Sands Hetherington
Sands Hetherington's books are available in paperback, kindle and nook.  For more information visit www.nightbuddiesadventures.com 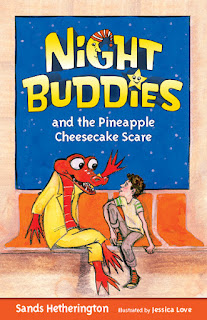 Night Buddies and the Pineapple Cheesecake Scare by Sands Hetherington is an after lights-out adventure story that will delight young readers and middle graders who relish roller coaster fantasy and fun, filled with unforgettable characters and an astonishing and inventive collection of magical whatchamacallits.
The book is all about the nighttime adventures of a young boy named John, who is not ready to go to sleep, and his friend, a bright red crocodile named Crosley who turns up under John’s bed.
They sneak out of John’s house using Crosley’s “I-ain’t-here-doodad” which makes them invisible to John’s parents. They then embark on an adventure chasing down enemies and cleaning up one mess after another as they solve the earthshaking mystery: who stole all the pineapple cheesecakes from the only factory in the world that makes them!
John, Crosley, and the amazing get-anything-free card.
The investigation starts out fine but things get a little crazy when Crosley, who is allergic to water, gets wet.  Hilarious things happen when Crosley’s allergy to water kicks in, and when they get to the pineapple cheesecake factory and meet Big Foot Mae, the investigation gets more complicated and zany than either of them bargained for.
Night Buddies is an astonishing and inventive adventure with unforgettable cast of characters that will make you laugh and win over your heart. The book has lots of thoughtful, multi-layered twists, giggles, and perils -- things kids can relate to and enjoy.
More about the author:

Sands Hetherington credits his son John for being his principal motivator. Sands raised his son as a single parent from the time John was six. He read to him every night during those formative years. He and young John developed the Crosley crocodile character in the series during months of bedtime story give-and-take. Sands majored in history at the University of North Carolina (Chapel Hill) and has an M.F.A. in creative writing and an M.A. in English from UNC-Greensboro. He lives in Greensboro. 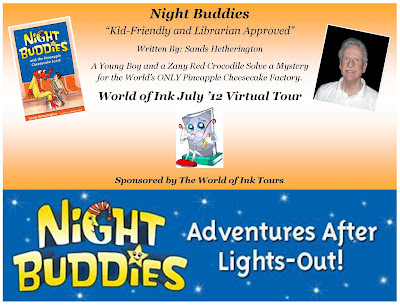 Thanks for hosting Sands Hetherington your blog today. Great post about writing.