I started writing when I was seventeen. I never did anything like submitting to publishers etc. until I was about twenty-five and then queried to no avail.
I started writing again seriously a couple of years ago because I had so many stories in my head.
I have published three erotic romance books to date and I am working on another book right now.
They are available on Amazon kindle. I love eBooks myself, and it’s rare now for me to buy a paperback or hardback.
I read heaps myself from across all types of genres. Right now I am reading the new release from Christine Feehan, Dark Storm.

For my own writing people and emotions inspires me. The complexity of life spurs me to write.
I find the world harsh. There’s not enough love in it. Lots of people never find love. I write love stories with happy endings to spread a little lightness around.
My books fall into the category of erotic romance because I do write the sex scenes graphically and that’s because I want the love the characters feel to show up properly in my stories.
I think too that readers have become used to reading more. They don’t want the description of the romance to stop at the bedroom door.
My latest release is ‘The Horoscope Writer’ and it is contemporary romance with a twist of paranormal.
Dominic Reed the horoscope writer is desperate for love. He doesn’t know he has never had the kind of love he suddenly finds with Cassie the female lead character. It ignites a sexual passion in him he didn’t know he could feel.
My books do contain graphic sex in the love scenes but they are love scenes, romantic and the characters are driven by love. 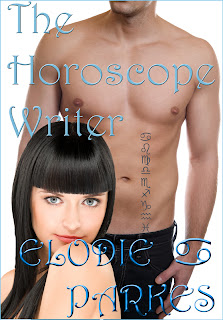 ADULT ONLY (18+) excerpt of The Horoscope Writer

Cassie smiled. “This is some garden Dominic are you sure you’re not a botanist?”
They had stopped and he put both arms around her hugging her close.
His face was in her hair and he pressed their hips together whispering.
“Not a botanist”.
Cassie lifted her hands to hold his face and kiss him.
She kissed him tenderly and then hungrily when the need to feel his skin against hers made her throb with need.
Dominic left her lips and kissed down her throat to suck a little at the base. He was cupping her bottom now and kneading her as he kissed her mouth again. His tongue finding hers and making her want to sigh with pleasure. She let out a little moan of appreciation and Dominic kissed the side of her mouth. She felt almost weak with the need to have Dominic make love to her.
“Cassie I promised you coffee and it’s become cold again out here”. He moved to hold her around the shoulders and walk back to the house. Cassie felt as if she wouldn’t be able to stand up now he had stopped holding her to his body, but she walked with him silently back through the garden to his house.
They were in his kitchen before she felt as if she could speak. The desire she felt for him had kept her silent.
He pulled out a chair for her to sit at the polished wooden table and was making coffee.
“I’m going to make instant Cassie. It’s actually a nice blend and we’ll get it quicker. Are you cold?”
She shook her head. “No Dominic I’m just desperate to make love to you”. Cassie was almost surprised to hear herself say this and she looked at him for affirmation.
Dominic was bringing the mugs of coffee to the table and he sighed.
“Cassie you are my dream come true. I already feel so much for you it’s scary”. Dominic meant what he said, and after putting the coffee down on the table, he knelt before her, and placed his head in her lap with his arms around her hips. The gesture touched Cassie deeply because it seemed to lay bare Dominic’s fear.
“Are you scared that it isn’t real, what we feel I mean?” She traced the side of his face with her fingertips.
Dominic looked up. “I know what I feel is real”. Cassie leaned to kiss him.
They were clinging to each other and Cassie whispered to him between kisses. “Dominic make love to me. Let me feel your skin against mine”.
He was captivated and stood with her in his arms to nuzzle down her neck. She had taken off her jacket and now Dominic moved aside her shirt to bite her shoulder gently. He sucked and kissed, and Cassie kissed him where she could reach, his ear, his neck, with her hands in his hair.

Dominic stood back and pulled off his sweater, and then almost tore the buttons of Cassie’s shirt open to reach her breasts. He pushed her bra down to her waist exposing her breasts and cupping them in his hands. Cassie’s breath was coming in gasps as Dominic sucked on her nipples, and then turned her around to clasp her to him, and kiss down her neck from behind. With his other hand, he unzipped her jeans and slid his hand down her stomach.
Cassie was desperate to feel his fingers inside her, and she arched towards his hand, pushing her jeans down for him to reach her. Dominic moved his fingers down to reach her wet and throbbing for him. He held her gently around her neck to reach her jaw and bring her head back to kiss her lips. With his fingers inside her, his tongue in her mouth, and his own hard desire pressing against her bottom Cassie moaned as she came. She was weak from the sensation, and Dominic was groaning low and whispering something to her. She turned her head more bringing her arms up around his head to keep his kiss on her lips.
“I need you so much”, Dominic was whispering, and he gently pressed her to bend across his kitchen table. Cassie knew what was going to happen and she craved it. Dominic pushed down his own jeans to free his erection before the hardness killed him.
He was tender as he pushed into Cassie from behind, holding her around her breasts so that she was not pushed hard against the polished wood. He slid into her and thrust deep wanting her to come again as she sighed with the pleasure of his hands on her breasts, her hips, and the way he filled her.
Dominic was in love with her, but she ignited a sexual need in him that drove him to thrust hard, and he let go of her breasts to bring his fingers to her bud at the same time as he thrust into her. Cassie couldn’t breathe as she came and gasped his name. “Dominic”.
He knew she was coming again because she instinctively pressed her delicious bottom up to his thrusts so that he drove onto her bud and made it last longer. He held her hips as he felt his orgasm start and then it overtook him with an intensity he had not expected. He was pumping into her and moved his hands to hold her stomach to keep her in place, and then he almost collapsed onto her as he leaned down to kiss her face where she had turned it to receive a kiss.
Dominic couldn’t move and stayed there holding Cassie tenderly for a few moments and then he slowly withdrew from her, helped her up, and turned her to kiss her lips.
Cassie kissed him, her arms around his waist, and whispered to him. “Dominic”. Just his name and it sent waves of sexual feeling over him.