Vanessa North introduces us to "Amazon: The Ushers"

Today on "Open Mic Monday", I'm introducing you all to Vanessa North who's swinging by during her virtual book tour.  She's excited to tell us about her first paranormal romance, Amazon The Ushers, releasing this Friday, October 12. Hey, don't forget to comment and also enter the giveaway via  link at the bottom of the post. Thanks for stopping by!  Welcome, Vanessa! 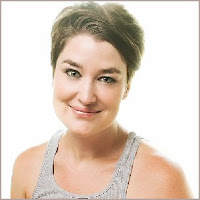 Amber, thank you so much for having me here today for this first day of my blog tour!

On Friday, Oct. 12, my first paranormal romance, Amazon, will make it’s debut. I’m not going to lie, I am thrilled that this quirky, sexy story is finally going to make it into the hands of readers. Since this is the very first day of the tour, I thought I’d talk a little about the genesis of the Ushers.

When I first decided to write this book all I really knew was that I wanted to write about strong female characters in an alpha-male world with an albino heroine--and everyone would be tattooed.

And so Bianca, the Guardian of Amazon Pack, was born. I decided to give her a destiny larger than herself: to repair the very same culture that made her an outcast in the first place. She also needed a motivation: the Goddess who created Werewolves is trapped and Bianca needs to start the Weres on the path to setting Her free.

Of course, Amazon is a love story, so Bianca needed a rather special guy to make this all happen. Enter Jack Murphy, the Guardian of a neighboring pack: a big bad wolf whose tough exterior hides a bit of a feminist free-thinker.


I like stories with a rich network of secondary characters, so I populated Amazon Compound with women and men from all different walks of life, each with a history that brought them to seek this haven for ghosts and misfits. Some, like Bianca, were born outcast. Others, like the Alpha of Amazon, Monica, were born to power and lost everything in a twist of fate. Still others keep their secrets close.

Once the cast was assembled, the story unfolded into a trilogy with three unique love stories and one common goal: to free the trapped Goddess. Thanks for letting me introduce them here today with the launch of the first book in the series, Amazon. 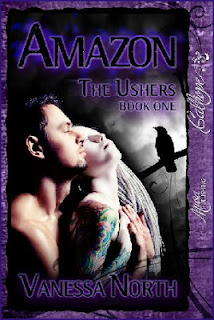 Blurb:
Jack's routine investigation of rogue wolf sightings threatens to uncover both Bianca's secrets and her passionate nature. Can she trust him enough to make the sacrifice her destiny demands?

Born albino, Bianca was spared death in infancy when her mother found safe haven among the ghosts and misfits of Amazon Pack. As Guardian of Amazon, she protects the hidden pack with a ferocity that belies her delicate appearance.

Jack’s routine investigation of rogue wolf sightings in his territory uncovers both Bianca’s secrets and her passionate nature. He finds her alluring and terrifying: he’s convinced she’s his mate, but is she also the Usher--key to their culture’s most sacred prophecies?

The Usher’s destiny requires a sacrifice to repair a rift in wolf culture and set the Goddess free. Can Jack and Bianca trust each other enough to pay that price?

Excerpt:
Bianca pulled her v-neck t-shirt over her head, shucking off her shoes and jeans. Jack immediately started shedding his clothes as well. Growing up among wolves, he’d never really given much thought to nudity. Their bodies grew in size as they shifted, so he was accustomed to stripping down before a run in order to preserve his wardrobe. He glanced over at the Albina as she shook her hair out. Standing in the moonlight, she was stunning. He saw her delicate pink nipples were still hard and aroused from his kiss. The curls of hair on her mound were as fair as her hair, and he saw the delicate pink folds glistening, swollen with arousal, peeking through the white curls. Her beauty was astounding. He saw marks on her skin, leaned closer to examine them. Tattoos, he realized suddenly. All wolves were tattooed after their first shift. Most of them were tattooed in black ink with colors for emphasis, but several of hers were done in white. As befits Albina, he thought as he admired the elegant symbols. Her entire back was covered, here and there a shadow in grey? or a bit of color drawing attention to some of the more consequential tattoos. Clearly she was a powerful Guardian for her pack--she’d not have been tattooed so many times without having achieved her place of power by virtue of her skills. As she turned to fold her discarded clothes, he could see some scars on her body, remnants of fights won. The tattoos glimmered in the dark, beckoning him to trace them with his fingers, his tongue. He groaned, and she looked over her shoulder at him with a smile.

“Kathy has changed already, are you ready?” she asked, turning to stare at his body in the moonlight. Hard and muscled everywhere, his upper body hairy and tattooed all over. She looked at his signs and symbols of strength and honor, a visual representation of his place in his pack. They confirmed that he was a fit mate for her--his beautiful body bore scars of fights clearly dominated, and the tattoos that marked him as a leader curled around them. She smiled, her gaze lingering at the proof of his arousal, standing proudly from the bed of black curls at the top of his legs. She blushed slightly as she realized he had followed her gaze. He grinned back at her with a wink as he sank to his knees.

She had seen many wolves shift before. However, she found herself curiously watching him, to see if her mate--there was no longer a doubt in her mind that he was indeed her mate—would seem different from those others. It was sensual, witnessing his change--his body shook and he turned his head with a loud cracking noise. He owned his change like only a powerful wolf could--it was masterful, graceful almost, as his black fur grew over his body. Then he sat, watching her, a huge black wolf with golden-brown eyes. He was resplendent. She knelt next to him, still in her human form, and caressed between his ears. His fur was soft and his eyes kind. He closed them and rolled his head into her hand like a dog seeking a touch from his mistress. His essential masculine scent still surrounded him in his animal form, and as she stroked his head, he snorted and his tongue lolled out between sharp lethal teeth to lap at her hand. She loved the feel of his fur between her fingers, and he clearly enjoyed her attentions. But then he shook his head, took a couple of steps towards the woods and whined back at her. If they were mated, they’d be able to read each other’s thoughts, as pack-mates could, and even more than that, they’d be able to share their feelings through their mate bond. But even without that bond, she could sense his eagerness to run. She grinned and let loose her wolf, feeling the change work over her, bringing forward the animal, tucking the woman away inside.

About the Author:
Vanessa North was born in New England but moved to the South as a teenager, where she learned to appreciate biscuits and gravy, bluegrass, and that most welcome of greetings: “Hey y’all!” She has a degree in Mass Communication but has long since abandoned journalism in favor of writing romance. Instead of telling the news, V would rather tell stories.

Vanessa has a voracious appetite for books and loves all kinds. She writes obsessively: every day brings new ideas and stories to tell. When she’s not buried in a book—hers or someone else’s—you can find her taking thousands of photographs of the people she loves.

She lives in Northwest Georgia with her handsome husband, not-quite-civilized twin boy-children, and a pack of dogs.

This looks like a really good book. I always love paranormal and when you add wolves to the mix, YUM!

Thanks for stopping by and sharing your story with us, Vanessa! I'm wishing you all the success imaginable.

Thanks for this opportunity! I love a fresh take on this genre and your heroine sounds so unique!