Author Emma Meade shares an excerpt of Under the Desert Moon

Thanks to Author Emma Meade for stopping by today and sharing an excerpt of her young adult novel, Under the Desert moon.  Welcome, Emma! 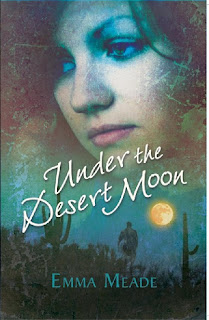 James raised his eyes finally.  “I’m sorry, Erin.  I didn’t mean to-” he paused, searching for the right word, “unnerve you.”
“You didn’t,” Erin replied automatically, but in actuality she was feeling distinctly unnerved, disturbed even.  Those eyes, so strange, almost trance-like.  Her earlier giddiness had completed evaporated.
“Are you sure?” James persisted.
Erin was quiet for a moment, thoughtful.  “Oh my God,” she burst out loudly.
James had been leaning towards her slowly but now froze.  “What?” he asked uncertainly, seeking to make contact again with her eyes.
“I’ve seen you before,” Erin said.  “You looked so familiar to me in Casey’s Diner the other night.”
James only looked at her blankly.
“But that’s impossible,” she said.
“What is?”  James’ tone was straining for a detached, almost bored air, but there was an underlying edge of anxiety.
Erin looked straight into his eyes without him having to urge her this time.  “There’s this old TV show I watched with my mom when I was a kid.  They showed re-runs on cable from time to time.”
She noticed how his knuckles clasped tightly.
“It was a sitcom, and the older kid in it, the college hero of the family-” Erin paused.  “He looks like you, James.”
Silence.  Then James stood and laughed, but it was forced sounding, and somewhat off balanced.  He stared down at her.  “They say everyone has a double, Erin.”
Erin rose to meet his gaze.  She stepped closer to him.  “I haven’t seen it in years but the resemblance is-”   What was the word?  “Uncanny.”
“Uncanny,” James repeated dully.
“Yes,” Erin whispered.  “My mom had a crush on that guy.”
“Did she?”  James smiled, and his tone was warm again.  “I’ll have to catch this show sometime, check out the resemblance,” he said, confident and at ease once more.
“I don’t think they run it anymore,” Erin said, studying him.
James shrugged.  “Don’t dwell on it kid.”  He slapped her on the shoulder like they were old pals.
His touch was cool and she quickly moved back from him.  James’ hand hovered in the air for a moment, seemingly undecided about what to do next.  He put it back in his pocket.
Those eyes, Erin thought again.  Like a cat, a big cat, a panther.
James stepped back from her now.  “Got to mingle inside some more,” he said, backing further away.
Erin nodded, and watched him slink gracefully inside the warehouse.  She was thinking of that television show.  They didn’t show that program these days, but her mother had bought it on video.  Where were those tapes?
Erin sat back down and switched on the camera.  Even if she could find them, she didn’t have a VCR anymore.  Did anyone in Copperfield own one?
The photo of his eyes loomed up at her.  She’d add it to her Sight collection.  Animal eyes, watchful, predatory, and waiting.

About the author...
Emma Meade lives in rainy Ireland. She loves vampires, slayers, witches, ghosts, aliens & shadow men (or at least the youngest of the Shadow Men), and regular people who live extraordinary lives (think Slayerettes and you’re on the right track).  Books, DVDS & TV show boxsets take up lots of space in her home, and she collects all the Point Horror books she can get her hands on.Writing supernatural short stories and watching marathon re-runs of Buffy are some of her favourite ways of escaping reality.
Author Website: http://emmameadebooks.com/
Blog: http://emmameade.com/
Goodreads: http://www.goodreads.com/book/show/15780938-under-the-desert-moon
Facebook: http://www.facebook.com/emmameadewrites?ref=hl
Under the Desert Moon on Amazon: http://www.amazon.com/Under-Desert-Moon-Emma-Meade/dp/0985243163
Amazon Author Page: http://www.amazon.com/Emma-Meade/e/B0064LKMK2
Twitter: https://twitter.com/emmameade83
Publisher: Soul Fire Press

Thanks a mill for this.

I have read Under The Desert Moon and it was great! I really enjoyed the strong heroine that although she had a life changing experience with her Vampire, she did not allow it to change her, and the plans she had for her life!

I also enjoyed Emma's Night Sigh's and I look forward to the next installment of both of them:O)