Hi Amber,
Thank you for hosting me on the blog today. I’ve brought along ‘Millie Reinvented’.
Millie Re-invented is about a young woman who suddenly realizes that her husband has not really been kissing her for a couple of years.
Millie is kissed by a young man who works in the same firm as she does under the mistletoe at their Christmas party, and the kiss is so different and enjoyable it jolts her into the realization that she has been kissing her husband but he’s just been taking it.
It’s not the only thing he’s been taking.
Millie finds herself assessing her relationship with her husband over the next months as the young man who kissed her at the party starts to pursue her.
The things Millie finds out about her husband astonish her.
She falls into a relationship with the young man, August. He’s very special and begins to love Millie entirely.
There are some fun aspects to this erotic romance for instance when Millie meets August’s friendship group from university. I hope readers will instantly like the group of women in this book and fall in love with August themselves.
People and emotions inspires me. The complexity of life spurs me to write.
‘Millie Reinvented’ was inspired through my day job.
I was talking to a young woman who was in the antiques shop where I work and she was buying a little sculpture of two lovers kissing. She said she had to have it because it was so nice to look at, as her husband didn’t even kiss her anymore.
I couldn’t say anything I just wrapped the item, and stored the thought until the story burst out onto my laptop.
My books fall into the category of erotic romance because I do write the sex scenes graphically and that’s because I want the love the characters feel to show up properly in my stories.
I think too that readers have become used to reading more. They don’t want the description of the romance to stop at the bedroom door. 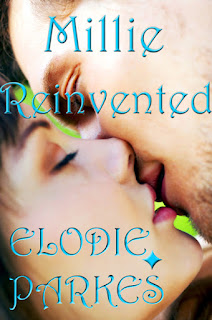 Excerpt
Millie smiled and looked longingly at his lips. August knew she wanted to kiss him and emotion flooded his eyes. It was amusement, desire, and kindness all at once. Millie hoped he would kiss her and not that she would have to show her need by pulling his head to hers.
August leaned in and brushed his lips against hers. “What are you drinking?” he asked, thinking she had probably had too many drinks and that was why she was so responsive.
When she said, “Orange juice”, he was surprised.
“Is that all, that’s what you’ve been drinking all night?” he questioned softly.
Millie nodded. “Yes. I’m driving home. Why?”
He smiled. “Do you want another orange juice?”
Millie shook her head. She didn’t want more orange juice she wanted more kisses. She sighed not knowing what to do next.
August did. He took her hand and led her to the corridor. It had other offices leading off it and he opened the door to one of them.
He looked inside and satisfied there was no one in there he pulled Millie gently into the room and closed the door.
Millie waited. August stood very close to her and put his hands on either side of her rib cage, holding her like that he bent his head to hers and began to kiss her. Millie felt his lips against hers in his slow sexy kiss and kissed him back with all the need she felt. August moved his hands a little and his thumbs found her nipples hard and pressing out to him through her silk shirt. He stroked them gently and kissed her, his tongue finding hers, and then receding to kiss her again, his lips closed. He whispered to her. “You are lovely”.
Millie was clinging to him and he began to unbutton her shirt. He kissed down her neck and then along her shoulder. He put his hands inside her shirt and unfastened her bra. Millie gasped with pleasure as he cupped both her breasts in his cool hands and kissed down the swell of them to suck first one nipple, and then the other, until Millie thought she couldn’t stand up.
August kissed up her throat to her lips as Millie unbuttoned his shirt and moved her hands over his chest. His skin was smooth and his muscles hard. Millie moved her lips over his, a soft touch, a gentle brush, and then a deep breathtaking kiss. She trailed the tips of her fingernails gently over the skin of his back and he took a deep breath.
“I’d like to make love to you; I would, but not here, not in the office. You deserve better”, he told her, and yet he moved his hands to her hips, and crushed her to him so that she could feel him hard against her.
Millie kissed the side of his mouth and then his jaw. She kissed him down his throat to his chest and swirled her tongue around his nipples. August had his hands on her bottom, he was kneading her low down, and it felt to Millie that if he kept going she would come. He kissed her and pressed her to him. Millie was desperate and she murmured against his lips with little sounds of need. August felt it himself but he couldn’t pull her down to the floor, nor lift her already short pencil skirt and push his fingers into her. He knew if any one walked in it would be a disaster and he began to button her shirt.
When Millie felt this she did the same and buttoned his shirt.
They smiled at each other in the dim light spilling in from the other offices close by. Millie sighed. “Thank you for kissing me August. It was delicious”.
August took her left hand in his and looked at the wedding ring on her finger. “You’re married Millie. Doesn’t your husband kiss you?”

Millie sighed again. “Not like that. Not like he means it. Not as if he likes it”.
August frowned. “That’s bad”, he told her, and he kissed the palm of her hand, and then found her lips with his again.
When he had kissed her until they were both breathless he moved back from her.
“He must be a fool” he said, and then he straightened his clothes, and hers.
“We should get back to the party. We can’t be in here when it ends and it’s nearly ten. I was under the impression it wound up at ten-thirty”.
Millie wondered what she must look like and outside in the corridor she detoured into the staff restrooms and looked at herself in the mirror.
She looked misty, wistful, in need.