I'm happy to host the author of The Crone Club, Sandra Peddle, to Kisses, Caresses & Whispers in the Night.  She refers to The Crone Club as "Hen Lit"--I love that term.  Please welcome her and be sure to leave a comment or two below her interview.  Thanks for stopping by! Welcome, Sandra! 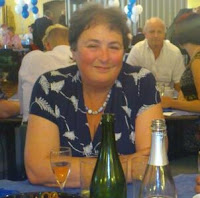 A quick description of the Crone Club:
Cass attends a reunion of her old class-mates and her life is about to change forever.  She is hoping to see her old best friend George again, so she can finally discover why George  just vanished so completely on the last day of school. As Cass waits in vain for George to come, she begins to wish that she'd stayed away too.  In contrast to her other friends’ interesting lives Cass has had a dull forty years married to a bully of a husband.  She also prays that no-one will ask her what happened to the old Cass, that promising musician who left school so full of energy and ambition in the '60s.

However, Cass is to finds out why George disappeared so mysteriously all those years ago and it makes her angry enough to walk out on her husband and her old life for ever.

Now reunited, Cass and her friends form themselves into The Crone Club, in which each of them pledges to recover her forgotten youthful dreams and aspirations, and then turn them into a reality.  Nothing is going to stop these women having fun and not a single one of them has any intention of 'acting her age.' 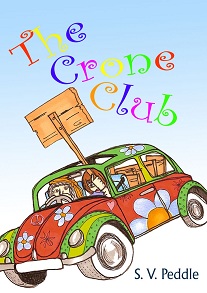 How would you describe the ‘reader appeal’ of The Crone Club?
Well, primarily, it is a light-hearted take on growing older and I hope readers will find a bit of a giggle. With the characters all in their early 60s, The Crone Club is Hen Lit rather than Chick Lit.  The crones are well aware that they are on the brink of a new stage of their lives and they are determined to approach it positively.  Each one of them sets themselves a “rites of passage” challenge and a dream, preferably one from their younger days that they never achieved. If readers go to the website: http://www.thecroneclub.co.uk they can join in and set themselves a challenge and a dream.

Do the main characters in The Crone Club change or evolve throughout the course of the story, and if so, how and why?
The whole point of The Crone Club is that the characters recognize that they on the brink of a great change in their lives.  (Well, at least most of them do, although the twins, Jan and Jess, are unlikely to take anything so seriously.) This book concentrates on only two main characters: Cass, the protagonist, who is forced to “develop a backbone” as one of my reviewers put it and her best friend George, who also has to rise up to her own, unique challenges.  The book, however, is the first of a series and each book will have a different main character and will follow on from the previous book. So George is the main character in next book, Crone Club Mayhem and she has to adapt to a whole new way of life.

Crone Club Mayhem will be available in Spring 2013.

As a writer how far would you say that you drew on your own life experiences to write The Crone Club and its characters?
I was born in 1952, which makes me slightly younger than The Crone Club members and somewhat behind the age of the "hippy."  However, I was profoundly inspired by the ideals of the times.

Most of the characters of The Crone Club are parts of me that have been given free rein to be themselves.  Like Cass, the protagonist of the first book of the series, I had a difficult relationship with my first husband.  Like the bookish Alison, I came from a working class background and attended a Secondary Modern school, before transferring to a Grammar School to take my A levels.  I also developed strong feminist beliefs at university in the 70s. Like the nomadic George, I have travelled abroad, teaching English as a Foreign Language. I have also become something of a heavy weight over the years so I can empathise with her struggle with the loss of her looks.  Despite being a teacher, I don't really share Mary's need to control, but I can identify with the way she keeps charity and old-fashioned notions of service at the core of her values.  I have to admit that I share the twins' mischievous streak and raucous sense of humour.  The only character you’ll noticed I don’t lay claim to is Bambi.  I have to admit that she originally grew out of the need to provide a fairy godmother, but there is much more to Bambi than that, as both this book and future books in the series will show.

Having said all of this I cannot alone take the credit for The Crone Club.  I could not have completed it without the collaboration of my husband, Vince.  Our pen name S. V. Peddle actually stands for Sandra and Vince Peddle.

So, do you think that the reader would describe the crones as real and believable? Would they perhaps remind us of someone we know and could we relate to their predicaments?
Well, the book is intended to be fun so to some extent the characters are exaggerated, as are their predicaments.  As I have said, each of them, with the exception of Bambi, are parts of me grown large. However, Cass develops through the course of the first book and George will forced to make some big changes to adapt to her new life in The Christmas Crone Club. In future books, each of the other crones will face some big challenges, which are all connected with life and growing older.

A husband and wife partnership on a book, how does that work?
On our author's website: http://www.svpeddle.co.uk you will find the other two books we have written together under the pen name.  The Moon Maiden was published in 2003 by Blackie and Co and Pagan Channel Islands, a work of non-fiction, was published by Robert Hale, first in hardback in 2007 and then in paperback in 2009. To be honest, Vince has been the main writer on both of those books.  I tend to have the ideas, but he brings them to life.

As far as The Crone Club is concerned however, Vince has also been instrumental in helping me shape the final version of this new book, but unlike our previous collaborations, it is very much my own conception and is particularly close to my heart.

How can we buy The Crone Club?
You can buy the paperback version on amazon.com, http://www.amazon.co.uk and the e-book is presently exclusively available on amazon kindle.  This would make a great Christmas gift--especially for a gran with a sense of humor!

S.V. Peddle (Sandra and Vince Peddle) on their website: http://www.svpeddle.co.uk

I absolutely adored this book. I can truly imagine myself in this situation, only in the last 2 years having had our own 30th school reunion, and it is fascinating how our lives do change, and sandra and vince (co writer) have captured this so well, I struggled to put this book down from the start. I already have the kindle version and am now waiting for my paperback to arrive, I surely hope there will be another instalment of the crone club, bring it on girls