Toying with Temptation--My review, 3 out of 5 kisses

Thanks for stopping by today as I feature Toying with Temptation as part of CBLS Promotions--don't forget to enter the giveaway below my review and read the blurb and excerpts.  Thank you! 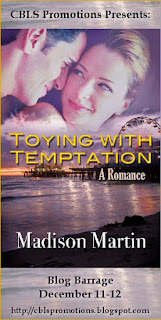 Blurb:
Driven, business savvy Hailey Burton, Vice President of Tryton Financial Institute, has been put in charge of running what could be her first ever failure: the company's Christmas Eve toy drive. Toys and Christmas are beyond Hailey's expertise, but when she's offered the chance for the promotion she's been waiting for if she succeeds, her competitive spirit kicks into high gear.

When every company in Los Angeles turns her down, desperation leads her to Quinn Matheson. Ten years ago, Hailey chose a prosperous career over Quinn, but as she falls for him all over again, she can't deny that they make a good team in business...and more. This second time around, is she finally ready to make the leap and become his partner in love?

Excerpt:
“Trust me. I never thought we’d be in this…er, position.” Hailey Burton smoothed her hands over the skirt of her brand new Armani suit to keep her hands from shaking. Quinn Matheson could never see how nervous she was. She wouldn’t let him. It would add further humiliation to her unfortunate circumstance, and she felt humiliated enough.

Quinn, the King of Matheson Toys and the picture of confidence, silently appraised her from behind the huge oak desk in his office.

“I mean, we’ve been in every other posi—” She coughed before she finished a sentence that could get her in big trouble. Whatever “positions” she and Quinn may have found themselves in ten years ago, it was too long ago to matter now. Wasn’t it?

She stiffened her spine and felt herself growing hotter by the second. A trickle of sweat began to run down the small of her back. Why fight it? Her brand new, one-of-a kind suit, bought for a special occasion, was headed straight for the cleaners.

He watched her with calculating dark brown eyes, noticing every time she fidgeted or said something stupid. It was beginning to drive her crazy.

“Are you going to say something?”

He shrugged. “It’s your meeting.”

In her eight years of experience, she’d met with and given presentations to presidents and corporate execs from companies all over the world. She always acted with cool confidence in situations that made tough men sweat, and not one minute of it ever fazed her.

What did faze her was sitting here in front of her ex, begging for tens of thousands of toys for her company’s first Christmas toy drive in five years.

Christmas was beyond the limits of her expertise. In her entire life she’d celebrated maybe one or two. Last year, she’d spent the holiday on a conference call closing a deal with a company in Hong Kong. The year before that, she’d been in New York collecting leads for a new account. Her boss knew Christmas was out of her league, but he also knew she never gave her projects less than a hundred and twenty percent, and he’d saddled her with the toy drive despite her protests.

If the promise of moving up the Tryton Financial Institute corporate ladder weren’t waiting for her at the other end of this, she’d have told her boss to forget it. But as usual, the desire for success was stronger than…well, the desire for anything else.

Stronger, even, than the will to never see the man she’d run out on ten years ago. As much as she never thought she’d have the guts to look him in the face again, that promotion was staring her down…waiting. Begging for her to come and get it. 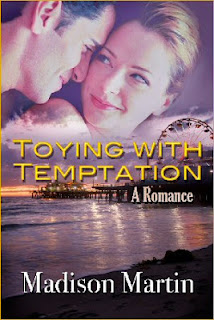 My review of Toying with Temptation--
3 out of 5 kisses

Toying with Temptation is a sweet story about a woman who's put her life on hold for her career and a man who's busy living up to family expectations rather than being true to himself.  But there's a catch--as there needs to be in any story, right?--she left him at the alter a decade ago, but now needs him to secure that big promotion she's been offered.

Hailey left Quinn because she thought she'd be losing herself and abandoning her dreams for a life spent depending on someone else, but her love for him never died.  That's the thing with true love, right? Its flame never fully extinguishes.  Being thrust into a business situation with him again stirs up all those buried emotions.

Seeing Hailey again has a different effect on Quinn...at least initially.  He wants to humiliate her, but at his core he's a nice guy and can't keep that pretense up very long.

The story has some amusing moments--a whale is involved with one, that's all I'm saying--and some endearing situations.  I definitely liked the main characters, Quinn and Hailey.  From the beginning it's obvious they're not over each other and, as a proponent of true love like myself, I wanted to see how they'd get over such a devastating heartbreak as being left at the alter.  I was definitely rooting for them--and I admit I was more on Quinn's side.  Hey, I'm a sucker for good looking powerful men, I'm not ashamed to admit my bias.

Overall, though, I felt the story could have been developed more.  This is a short read, only 188 pages, and I felt that the story was only told on the surface.  The premise for this story is good--the characters are sweet--I wanted to get to know them better, see them suffer more perhaps and have some added depth to the storyline.  When you have a good idea like this plus nice characters, a reader simply wants more.  That's how I felt with Toying with Temptation...there were some holes that needed to be filled and questions that remained about these two interesting characters after I'd finished the book. I wanted more oomph.  I give Toying with Temptation 3 out of 5 kisses.

Posted by Amber Lea Easton at 1:50 AM

Amber, thank you so much for having me on your wonderful blog today, and thanks so much for the review! It's been a blast :D

Thanks for allowing me the opportunity to read your work, Madison. I wish you much success. Be well.