Today I'm happy to host a fascinating author, Missy Michaels, for Open Mic Monday. She's been kind enough to answer a few of my questions and share a bit of her new novel, To the Swift. Welcome, Missy! 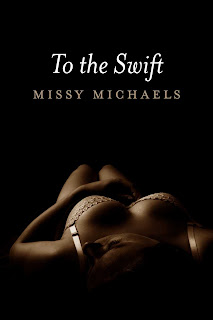 Thank you for taking the time to stop by Kisses, Caresses & Whispers in the Night today.  I really appreciate your time.  Can you tell us a little bit about your newest release?
To the Swift tells the story of Monica LeBlanc, a Louisiana native, who moves to Memphis, TN in an effort to save her marriage. Daniel LeBlanc needs a fresh start to prove to Monica that he loves her more than the gin and vodka that’s available at the nearest liquor store. They easily make friends in their new city but one of their new friends has a twisted obsession with Monica.

What inspired this novel in particular?
Stories my grandmother told from her youth, my own experiences and my fascination with the city of Memphis, TN.

What comes first--characters or plot ideas?
In this book the characters came first.

How important is setting? Does it play an integral role in this story?
Setting was very important to the story. It is set in two real cities, the characters eat in real restaurants and visit places that really exist in Breaux Bridge, LA and Memphis, TN.

What motivates your main characters?
Wanderlust, obsession, love and independence.

What is the central conflict?
A marriage that’s in trouble, a twisted friendship and misplaced trust.

What is your favorite aspect about being a novelist?
My favorite part is getting to know the characters and their motivations.

What draws you to this particular genre?
I write the type of stories that I’ve always loved to read.

Are there any other genres you can see yourself writing and why/why not?
I will write a ghost story. I grew up listening to my family tell stories of supernatural experiences.

What’s your goal as an author?
By that, I mean...why write? Why is it important to you?  I’m observant, creative, blessed with a good memory and a fantastic imagination.

If you could snap your fingers and transport yourself anywhere in the world, where would you go and why?
I would go to the mountains in Colorado because the view would be amazing. Or into a bank vault because that’s where the money is.

Tell us 5 little known facts about yourself.
1) I collect Hot Wheels
2) I own a 1992 Chevy Camaro RS 25th Anniversary edition
3) My favorite movie is Disney’s The Lion King
4) I’m learning to speak French
5) I meet the qualifications to be on Worst Cooks in America on Food Network

I love your 5 things! Whenever I ask that question, I'm not sure what I'll get but I'm rarely disappointed. Thanks! Now let's take a peek inside "To the Swift".


Monica Jerome grew up wealthy, pampered and carefree in Lafayette, Louisiana. Daniel LeBlanc grew up poor in the nearby town of Breaux Bridge. Daniel meets, pursues and marries Monica after only a four month romance. After nearly ten years of marriage and the birth of their daughter and two sons they decide to leave the bayou country of Louisiana to move to Memphis, TN. After settling into a front office position with a luxury hotel in her new city Monica finds herself being preyed upon by an obsessive stalker. Unbeknownst to her, it is someone she trusts and considers not only her co-worker but a new friend. A spur of the moment decision to save a marriage has totally unexpected repercussions. What happens when a friend quietly and persistently unleashes his own agenda to make devastating changes to the outcome the couple desperately seeks? 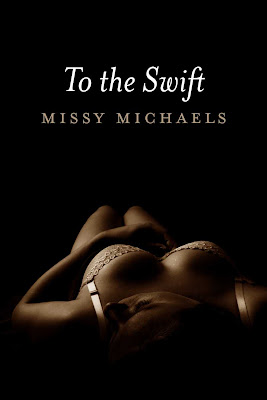 Excerpt:
Monica rehearsed how she would present this turn of events to her parents as she drove to work. She was taking them to dinner at Mulate's while her kids spent the evening at Melanie's. Monica had explained to Daniel that it would be much better to sit down to talk with them than to springs a call on them from Memphis.
She was still reeling from that experience herself.
That evening her parents both dined on the Stuffed Catfish Cecilia and their petite daughter dove into the Fried Alligator Platter. While they decided if they had room for Atchafalaya Mud Cake or Key Lime Pie for dessert an air of expectancy lingered over the table. And it wasn't over what their next menu selection would be. Jack remembered very well the distinct change in his daughter's demeanor the day before.
Monica let her eyes wander from their fellow diners to the musicians. As the band played several couples had been enticed onto the dance floor by the upbeat tunes. Monica knew this was one of her parents favorite restaurants for both the delicious menu and the lively Zydeco musicians.
As she turned back to the table she realized that her parents were watching her. And waiting.
"This was delicious as always, they never disappoint. Monica thank you for dinner sweetheart," Adrienne stated as she sipped her iced tea.
"I know. This food is so good I can't stop. I really want Key Lime Pie even though I'm stuffed." Monica patted her stomach while she sighed softly.
"We can buy a whole pie to take home. That way the kids can enjoy it with us," Jack suggested. Keep the small talk coming Monica thought gratefully.
"Monica, are you pregnant?," Adrienne asked abruptly. Okay then. So much for the light banter.
"Pregnant...umm, no. I do have news though," Monica responded slowly while collecting her thoughts. Her parents were observing her intently. Monica looked at her iced tea glass to the right of her plate and started counting the melting ice cubes.


17)         Show more
18)         Bio of author
19)         Missy Michaels was born in Fort Hood, TX and raised in Springfield, MO. She has also lived in Indianapolis, IN; Breaux Bridge, LA and Memphis, TN and she currently resides in Dallas, TX. Missy loves road trips, emphasis on road, as she has a lifelong fear of flying. She is in the process of planning her very first plane trip but the details are intricate so it could take a while. She also loves barbecue, Chevy Camaros and collecting Hot Wheels.
20)

Interesting book. Enjoyed the interview--especially the part about Colorado (I grew up in Denver) and the Camero. We must be kindred spirits--I have a 1997 silver Firebird with performance package and a black racing stripe. License plate: HT FLSH1. Not a mark on her.
Good luck with the book!
Jan

Interesting book. Enjoyed the interview--especially the part about Colorado (I grew up in Denver) and the Camero. We must be kindred spirits--I have a 1997 silver Firebird with performance package and a black racing stripe. License plate: HT FLSH1. Not a mark on her.
Good luck with the book!
Jan

Thank you very much Jan! That's really cool about your Firebird, we are kindred spirits!