I've been a published novelist for two years now--three published romantic suspense novels with another on the way in a few months. What a steep learning curve it's been! Prior to becoming published, I worked as a journalist for nearly 20 years (freelance, staffer, and editor). I also went to countless writers' conferences, attended workshops, pitched agents, and encountered my share of rejection for about a decade. I've had my successes...and failures. I don't consider myself an expert because I learn something new almost daily; but I'd like to share some of my experiences thus far with anyone who cares to listen.

First, don't obsess about numbers. The words "author platform" are thrown around constantly. At first, I had no idea how to go about this. I knew how to write a book, develop a character, edit the hell out of a manuscript, and write a decent query letter. Once I heard the "Yes, we'd like to publish your novel" from my publisher, I started obsessing over my platform. How do I create it from nothing ?

Twitter seemed like a strange entity full of nonsense. Creating an author page on Facebook felt intimidating before book one released. Blog about what? Romance? Writing? More nonsense? Yes, I obsessed over Facebook likes, Twitter followers, and blog posts. I went about it the wrong way in the beginning...I joined like parties with other authors, bought Facebook advertisements to generate likes on my page, and followed people on Twitter just so they'd follow me back. However, this is not the right way. Yes, I built up numbers, but not genuine followers. When I'd post something--like a review for my novel--I'd lose people. Numbers are just that...numbers. When building a platform, you want people who genuinely like your content or who are your true demographic. This comes from time...and it does come. Be patient.

Second, care more about producing quality work over quantity. Excellence always sells. Readers don't want to waste their time or money. Invest in an editor. Revise, revise, revise! Just because it's easy to self-publish, don't rush to the market place because you finally finished your masterpiece and think you're the next Hemingway. Editing and getting feedback on your manuscript is essential before it's launched to the masses...or pitched to an agent or editor.

Editors and agents are busy people. Make sure your manuscript is absolutely the best it can be before sending it because you may only get one shot. I am also an editor so listen to this carefully: when I make a suggestion, it's to make the writer's work the best it can be. That is all. No ill intent. No competitive nature. However, I've dealt with some writers who get bent out of shape when I don't think their masterpiece is flawless. Get over yourself. I'm also a writer and I crave an editor's feedback. I can't imagine that will ever change, even when I'm on book sixty.

Third, choose your critique partners carefully. Yes, Veronica next door may also be working on a manuscript, but if she's unpublished, too, what value does she bring to the table? Maybe she's a creative writing professor, I don't know. I'm only asking that you seek critiques from people who can help you. Your mother probably isn't the best source, neither is your frienemy from the PTA. When picking a writers' group in your area, it's okay to ask how many are published and what genres they represent. As a romance novelist myself, I can tell you I don't want someone who hates that genre giving me feedback. I'm writing for my audience, not theirs. This truly matters so think about it carefully.

Fourth, it's okay to say no. You are a talented, passionate, creative soul. You've worked your ass off writing and editing your manuscript (I hope). If you're pitching to every agent in Writers' Market who happens to represent romance and one says yes, do your due diligence. (You should do that first, but sometimes it's easy to get swept up in the excitement of it all, I know.) How many sales has this agent had in the past year? Were they books in your genre? How do they prefer to communicate with you the author? Will they work with you with editing or marketing? Will they represent your other books or are they signing on for this one only? Ask questions. At the end of the day, publishing is a business so you need to approach it as such at this point. It's your baby...be protective of it.

Same goes for reviews. Before sending advanced reading copies (ARCs) off to potential reviewers, do your research. Do they like your genre? How many reviews have they done? What's their standard tone in their reviews? Can they write? (Yes, this matters because you'll want to use them for marketing.) Will they actually follow through with writing a review or are they just looking for a free book? (I've had this happen to me in the beginning...be careful.)

Five, write your next book. Don't get so wrapped up with marketing and networking that you neglect your works in progress. Readers are always waiting for your next big thing if they loved your first book! Find a balance. I know that's hard, but you can't neglect the writing. I have a system where I market first thing in the morning and last thing at night. That's it. All of the time in between is spent on producing content. Writing is where the bliss is, that's why I do this. Never lose sight of that. 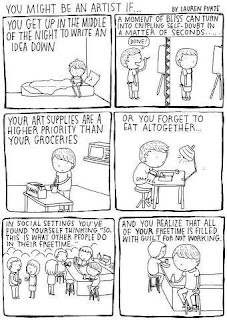 Nice post and good advice. I'd add: It's never too early to start building your author brand. It's easier to promote your book if you already have a platform in place. A lot of writers that are just starting out don't realise that they will need to put time and effort into the marketing side of things too...which all authors must do (regardless of whether they are self publishers or traditionally published).