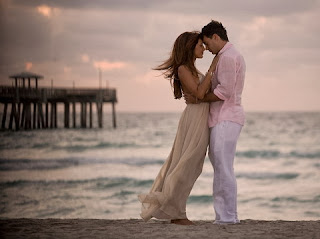 All novels, regardless of genre, need captivating characters and hooks that pull the readers into the story.  Romance, in particular, is a character driven, highly charged genre.  In all great love stories, there needs to be an emotional connection, not just between the characters, but between them and the readers as well.  How do we novelists write engaging/believable romance without being cliché, crass or cheesy?  After all, emotion can go over-the-top if we’re not careful.

* Flawed characters.  No one is perfect, even if the hero looks like a Greek God and makes you drool.  In order for the reader to connect, there must be a vulnerability that makes the character human.  Why root for someone if we think they’re superficial or mean?

* Attraction.  You may think that’s easy to write, but it isn’t.  Saying, “wow, he’s hot” is lame. Think about it...when you’re attracted to someone, don’t you have a physical reaction?  When I write attraction, I don’t tell the readers I show them through nonverbal cues.  In Riptide, when Lauren first interacts with Noah, I write, “little earthquakes of desire rocked through her until she thought she’d fall off the stool.”  For attraction to jump off the page, the reader needs to feel what’s happening, imagine being on that stool and talking with that man.  Non-verbal physical reactions are key to engaging the reader in this area, which we all know is a key element of any romance novel.

* Conflict. Nothing worth having comes easily, isn’t that the saying? Even though there is the attraction, there needs to be a conflict to overcome whether it’s trust issues, betrayal, or, because I write suspense, a life and death situation.  Even though I have the suspense in my novels that provides a natural plot conflict, there are still human conflicts that need to be worked out to make the characters believable.  We all have baggage--past heartbreaks, abandonment issues and what not--so the characters need those as well.

* Sexual tension and sex.  The sex needs to come at a natural time in the evolution of the relationship, just like in real life. Now this timing varies from story to story depending on character development, but the readers truly need to be saying, “will they ever just rip each other’s clothes off already” before I give them satisfaction.  Writing sexual tension is fun...prolonging the actual act, building up to it...not only do the readers shift in the chairs with anticipation but so do the characters, which makes it all that much more rewarding when the sex scenes finally happen.

Engaging romance readers is all about tugging at their heartstrings and making the characters as believable as possible.  We all want to be rooting for the happy ending and smiling when we turn the last page.
Posted by Amber Lea Easton at 5:30 AM