Today I'm rolling out the welcome mat for Author Natalie-Nicole Bates, author of "Come Full Circle." She's stopping by on her big promo blitz and conducting a giveaway for a $15 Amazon gift card! Let's check out her blurb, excerpt, and join the rafflecopter below!

A brief synopsis...
Fifteen years ago, Bethany Minor fled her hometown after being left at the alter by Dane Brennan. After the sudden death of her mother, she is forced to return home and face her past.
The years have been hell for Dane, and seeing Bethany again only reopens wounds he long thought closed.
When they realize the flames of their past love never died, Bethany and Dane will need to confess all before they can have a chance to reclaim their life that once should have been.
But when the truth of the past is finally revealed, will they still stand as a couple? 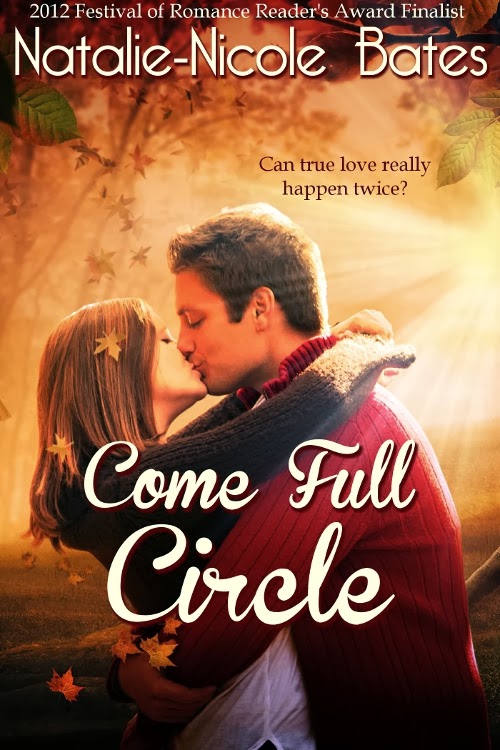 Dane felt strangely nervous about meeting Bethany. What could she possibly have that belonged to him? When he’d seen her earlier, at first she’d barely acknowledged  his presence.
But when she hugged him so hard it almost took his breath away, all of the old feelings came welling back up inside him, along with the regret of losing her, and the promise of everything a life with her would have brought.
The feelings of loss and sadness became so acute, that he could actually feel a pain in his chest. He’d made so many mistakes, and the gravity of those mistakes was still apparent.
Finally, he caught sight of her walking slowly up the street toward him. She was dressed only in a  loose-fitting old  sweatshirt and jeans, totally inappropriate for the cold, rainy weather. At that moment, he wanted nothing more than to take her in his arms, and beg her for a second chance. That, he would not do. He still had some semblance of pride and reality.
“Bethany, why did you walk here in the rain? I would have been happy to come to you,” he said, and dared to push a few errant strands of her dark hair away from her face.
“I need fresh air. Being in my mother’s house with all of her things…it was closing in on me.”
“I’m sorry. Would you like to get out of the rain? We could go somewhere and get a cup of coffee, and talk,” he  suggested hopefully.
“I’m not really to being around a lot of people, Dane. The funeral will be hard enough.”
“Would you like to come home with me for a while? At least you won’t be alone.” He made the offer, but from the look on her face, he already guessed her answer.
“No. Thank you for offering, though.”
Her refusal made it sound as though she’d said no to a business associate, not someone she’d once loved.
After a few minutes of silence, she spoke again.
“So anyway, here is what I came to give you.” She produced a small, familiar-looking box, from the front packet of her jeans.
He licked his lips. “I hope that’s not what I think it is.”
She lifted the lid, and as he feared, it was the engagement ring he’d given her, when he thought of her as his princess. The round diamond twinkled proudly under the harshness of the street lights.
“I don’t want it back,” he stated firmly. He didn’t ever want to see it again. The ring was a harsh reminder of what might have been.
“Well, I don’t want it either, Dane. It belongs to you. I thought my mother returned it to you after…after we broke up. It was wrong for her to keep it.”
She was trying to push the box into his hand, but he refused to open his hand and stepped back from her.
“Throw it into the garbage, Bethany.” He pointed to the public trash receptacle.
“I can’t throw it away; it’s too expensive!” she exclaimed.
“Then give it away, donate it, sell it! I don’t care!”
When she shrank back, he realized his tone was  harsher than he’d intended. Immediately, he stepped forward and pulled her into his arms. “I’m sorry, I’m sorry,” he repeated over and over again.
He wasn’t sure exactly, how it happened, but his lips found their way to hers. He closed his eyes and basked in her familiarity, her taste, and his tongue gently parted her lips. As their kiss deepened, he became keenly aware of the contrast of the intense heat coming from her skin, and the icy coldness of her hand on his neck. In that one moment, he was ready to beg Bethany to escape with him forever.
“Hey, Mr. Brennan.”
The voice jolted him back to reality. A teenage boy  held the hand of a teenage girl as they passed by. They  looked vaguely familiar; most likely they were from the neighborhood.
“Hey,” he answered back.
“Hear that? If I’m Mr. Brennan, what does that make my father?” he whispered into Bethany’s ear.
Without a word, she tilted her head back and connected her beautiful espresso brown eyes―the eyes he’d fallen in love with―to his, and held him captive.
There was so much he wanted to say to her, but the words wouldn’t come. He touched a hand to her cheek, and found that her skin burned beneath his fingertips.
He then spoke the obvious.
“Bethany, you’re burning up with fever. You can’t be alone tonight. Come home, and let me take care of you,” he implored.
She blinked a few times, and he held a tiny hope she would agree to leave with him, but she reached up and ran her fingers through his beard, and said, “You know I can’t do that.”
“Well, at least, let’s go to the apartment upstairs at BFC. I lived there for a few years. It’s really nice.”
Her eyes grew huge. “I never want to go to that apartment again!”
Then she darted away from him, and hurried off in   the opposite direction.
For a moment, he simply watched her leave, perplexed at her final words. Why was she so upset at the mention of the apartment? It wasn’t as though she ever stayed there. It was mostly for interns from the mortuary college, who were on-call during the night.
He slowly crossed the street and walked to his car. Reaching his hand into the pocket of his jacket to get his keys, he  found the box with the engagement ring. A caustic laugh escaped his throat. While he was lost in their kiss, she’d found a way to return the ring.

Natalie-Nicole Bates is a book reviewer and author.
Her passions in life include books and hockey along with Victorian and Edwardian era photography and antique poison bottles. Natalie contributes her uncharacteristic love of hockey to being born in Russia.
She currently resides in the UK where she is working on her next book and adding to her collection of 19th century post-mortem photos.

Thank you so much for hosting Come Full Circle at your fabulous blog!