A "Secret Ingredient" for #Romance

I'm casting the spotlight on Lynn Rae's novel, The Secret Ingredient! This story sounds yummy in more ways than one. Check it out. 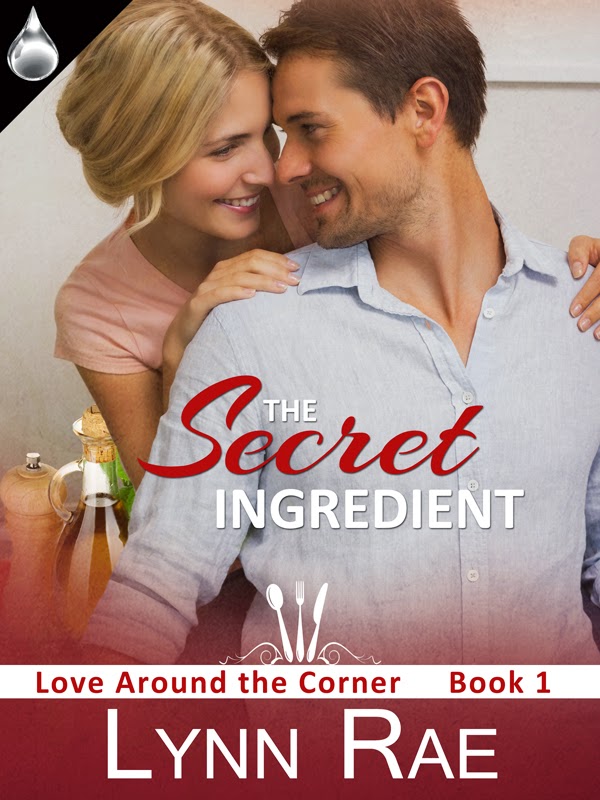 Blurb...
Nate Garner is a happy-go-lucky short order cook looking for his big break. When he answers a casting call for a new reality cooking show, he needs a person behind the camera to help with his audition. Enter June Sinclair, a hyper-organized school secretary recruited by Nate's sister to produce his video. Nate and June get to know each other as they film him cooking, shopping, and mixing drinks at his mother's bar. Nate fights his growing attraction to June, because he knows she needs someone reliable to write into her well-worn planner, while June assumes he’s already involved with his best friend, Heather. What sort of future can they cook up together when Nate gets the call to go to Hollywood?


“Miss Sinclair! There’s a man here to see you!” Ralston Tippet’s voice trilled out, and she unfolded her legs preparing to crawl out from under the beans. Probably a father in search of a wandering child. She seemed to attract any stray in the neighborhood, just like Ralston and his friend Emma Dooley who’d spotted her in the garden that morning and rushed to help make a mess of things.

Heedless of the dirt she was grinding into her knees, June pushed herself up and out into the hot July sunlight, blinking at the man-shaped silhouette in front of her. As her pupils contracted, she took in broken-down jeans, a soft brown T-shirt with a cartoon pig on it, broad shoulders, sunglasses, and a bright green ball cap. At least he wasn’t standing on any vegetable plants.
“Here he is, Miss Sinclair!” Ralston capered around while swinging a hoe with little regard for the safety of those in his vicinity. June reached out and grabbed the handle and wrestled it away from the kid. Yes, there he was, and what was she supposed to do with him?
“Can I help you?”
“I guess so, if you’re June Sinclair.” He tilted his head and altered the angle of his sunglasses as he looked her over. She saw a dark reflection of herself for a moment. She was dirty, sweaty, and unimpressive.
“I’ve been June Sinclair ever since I was a teeny-tiny baby.” Ralston giggled at her feeble joke, but the man just put his hands on his hips.
“You’re still little, Miss. Sinclair.” Ralston piped up, proud of his recent growth spurt, which nearly put him at her eye level.
“Ah, okay. My sister Becky just called you. I’m Nate.”
Oh. Oh no. June wanted to go back into the bean teepee and think about this for a while. When Becky Wray had called earlier and explained she’d needed a favor on behalf of her little brother, June had automatically defaulted to thinking of a kid needing help and had agreed without much thought. That was the trouble with working with kids all the time—she wasn’t used to meeting big adult men with stubble on their chins.
“Right. I was expecting someone else.”
“I’m the only brother she has.” He sounded peeved.
“She said you needed a video, but she didn’t explain much.”
“Ah, it’s a lot to go into over the phone.” He brushed one hand down his side as he glanced over the garden. It certainly looked a lot better than it had before she and the kids had gotten to work on it earlier. Now at least most of the weeds were uprooted and wilting in the sun.
As she waited for Nate to get to the point, she directed the kids to pick up the gardening debris and pile it into the wheelbarrow parked in the middle of the plot. Emma and Ralston were mutual sidekicks and had been since first grade. June wondered how their friendship would weather puberty. Reflecting that hormones messed up most things, she leaned over and gathered discarded tools, wiping soil from the edges off with her boot soles.
“Maybe this wasn’t a good idea,” Nate spoke up. “You’re busy.”
“I’m always busy. It doesn’t mean I can’t listen and work at the same time. We’re wrapping up here anyway.”
With a shrug of his big shoulders, Nate waded in and retrieved a shovel Emma had left among the popcorn seedlings. “I need help with a video. They have a list of things they want, and it’s complicated.”
Complicated. June relished complicated. “We need to stack the tools in the shed, right over there.” Handing him her collected trowels and Ralston’s hoe, she pointed the man in the direction of Mike the Custodian’s outdoor-equipment shed. Mike was on the grounds mowing today, and he’d lock up later. June tried not to notice Nate’s rear view as he walked away, but she couldn’t help noticing how the soft shirt clung to the muscles of his back. Hmm. He didn’t seem to be much younger than she was.
Ralston and Emma had almost tipped the wheelbarrow contents over by the time she got to them, but together they pushed the awkward cart to the compost heap the fifth-grade science classes had constructed. The front tire stuck into the soft ground at the edge of the open enclosure, and she and the kids struggled to lift up the handles and dump the load. Just as she bent her back to give it a shove, Nate’s hands were easing hers away and with an easy shrug, he tossed the weeds into the bin. So those shoulders weren’t just for show.

Emma and Ralston disagreed over who was going to push the wheelbarrow back to the shed until June told them to each take a handle and work together. With a glance at the man next to her, she wondered what to say. “Thanks for your help. With cleanup.”
“What is this? I don’t remember a garden here.”
June looked over the ragged square cut into the lawn beside the school building. The students always put it together with such enthusiasm in April and May, but once school was out, it tended to run wild over the summer. The yellow pear and black tomatoes seemed to be faring well with benign neglect, as were the onions and beans. The peas on the trellis were sad, but peas always were once the temperature rose. “It’s a community garden.”
“Who eats all the produce? There’s no one here.”
“I take it to the seniors at the Acres. What exactly is this project you need help with?” June peered at him.
Nate turned to face her. “It’s an audition video for a television competition. A reality show.”
“What, you’re a singer?” June’s heart dipped. Just her luck. He was a musician surrounded by groupies and having reckless sex every night. Nate laughed out loud, and her nerves hummed.
“No way. I’m a cook. A chef, I mean.” He straightened up and gave a nod like he’d promoted himself.
June was intrigued despite her good sense warning her to step back from her curiosity. “You mean like Top Chef, or that horrible one with the cursing man ... ah, Hell’s Kitchen?”
He nodded and leaned her way. “So you know about them. Yeah, it’s like those, but it’s a new one. The audience votes on it, kind of like American Idol.”
June shook her head. “That doesn’t make any sense. How can someone watching in Idaho know what the food tastes like?”
He shrugged, and she was again distracted by those shoulders. He must lift really heavy bags of potatoes every day. “I have no idea. But they want another tape from me, and there’s this long list of things they want to see before they bring me out to Hollywood. Or Burbank maybe. I’m not sure where they’re filming it.”

Lynn Rae makes her home in land-locked central Ohio after time spent in the former Great Black Swamp, beside the Ohio River, and along the Miami and Erie Canal.  With professional experience in fields ranging from contract archaeology to librarianship along with making donuts and teaching museum studies, Lynn enjoys incorporating her quirky sense of humor and real-life adventures into her writing (except the naughty bits).  She writes sci-fi, contemporary, and historical romances. Join her on Facebook at https://www.facebook.com/lynnraewrites or check out her website at www.lynnraewrites.com.
Posted by Amber Lea Easton at 9:19 AM