Can Their Secret Affair Survive the HEAT? #NewAdult #Romance #NewRelease 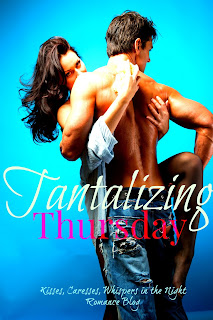 Shining the spotlight on this sexy excerpt of the new release Heat by Cassidy Springfield... 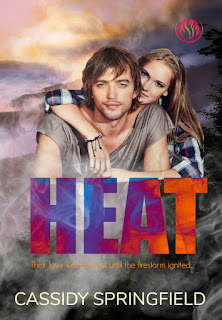 Kiley Ross and Leo Marshall have a secret. He's her indulgence, her vice. She's his compass, his impossible dream.

I walk toward the cabin and smile when I see Leo lounging on the front porch swing and moving it back and forth with his foot. His head is tipped back, his eyes are closed, and he's humming. I stop before he sees me to simply look at him. I want to memorize him like this—young, carefree, and waiting for me.

I think these are the moments I will remember when I am an old woman sitting on a rocking chair somewhere and smiling over a boy I used to know.

I must have made a sound because he stops moving the swing and looks in my direction. His slow smile has me burning with lust.

I climb the stairs slowly even though I want to rush into his arms and melt against his body. Without saying a word, I unlock the door. He engulfs me in a hug from behind and buries his face in my hair. I am overcome with desire.

He kicks the door closed. We don't turn on the lights. He spins me around and kisses me. We tumble toward the bedroom while fumbling to get naked. My hands are on his clothes and his are on mine. We are like a wild frenzy of arms colliding, clothes falling, lips melding, and skin touching.

We fall backward onto the bed. He mouth is on my neck. His hands are on my breasts.

I slide the heels of my feet over the backs of his legs. I sink my fingernails into his ass. He pulls his lips from my body only long enough to rip open a condom wrapper with his teeth. I take it from him and roll it over his erection.

We've done this before—many times. He has visited me in Boulder for the past three years, always in secret, always intense, always mind-blowing.

He rocks inside me. Our breath tangles between our mouths. 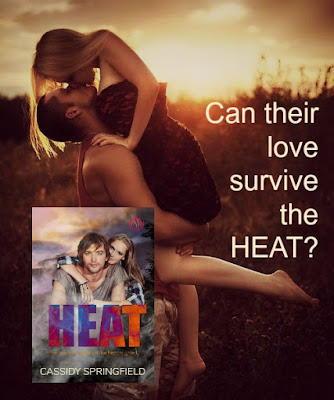 The cabin is too warm. Sweat slicks between our naked bodies as we roll across the bed. I have never wanted anyone or anything as much as I want Leo. Maybe I never will.

He wraps his fingers into mine and presses my hands over my head while moving inside me with the same intensity he shows on stage. Perhaps more. It feels like more, but maybe I just want it to be.

Only a few hours later, I am wrapped in Leo's arms watching the first rays of sun slide across the wood floor. Our bare legs are tangled together on top of the bed; his chin is resting against the top of my head.

"I wish you would have told me about your tour," I admit.

He holds me a bit tighter. "I didn't think you would care."

"Why wouldn't I care?" I twist my head to look at him. "And don't you dare tell me that talking isn't what we do. We talk."

He grins his sleepy-sexually satisfied grin. "We don't talk much."

"Okay, seriously," he rolls onto his back and drags me on top of him. "You have made it very clear that we are sex buddies and that's it. You're leaving for graduate school, I'm touring with the band, and it's all okay. We have an expiration date. I have never believed otherwise."

I drum my fingers against his shoulders and contemplate what he said. He's not wrong. I've never been someone who dreamt of happily ever after's and really don't see how we could make it work past August, but yet I don't want to lose him either. I can't have it both ways, I know.

"I wish I would have known, though. I can make t-shirts."

"For your band, with your logo."

He arches an eyebrow and looks doubtful.

"I know how to make t-shirts, Leo." I smile and trace my thumb over his chin. "I want to do it, you can sell them at your shows. I bet you would have made a killing last night. All those girls wanted you."

"Right. Marketing." He winks. "Thank you for thinking of my bottom line."

"They would go well with the CDs you produced."

"Why do you want to make me t-shirts?" He brushed his fingers through my hair that has fallen over his shoulders like a shawl.

"But why do you want to make them for me?"

I know he wants me to admit I like him as more than a hook up. I bite my lip and think about how to word my response in a way that won't give him the wrong idea.

He sighs and shakes his head, as if disgusted that I can't give him a simple response off the top of my head. "I gotta get home, catch a few hours of sleep, and then get back here to work. Your dad wants us all helping on hauling away any slash around the property to clear a defensible space." He rolls away from me and sits on the side of the bed.

Using my index finger, I trace a line from beneath his neck down his spine. He has a tattoo of a columbine flower on his bicep. He says he got it for me—to remember this place when he moves away one day. He studies me over his shoulder as I trace the flower with my fingertip. The light of dawn ekes its way toward the bed, reminding us that the day is approaching and our alone time is ending.

"The resort is donating supplies for the firefighters and I'm driving the van up to the firefighter camp at the Hawkins' Ranch this afternoon. Want to come? It's considered resort work so I'm sure—"

"That I won't have to punch out? Got it. Sure. I'll be the driver, wouldn't want your daddy to think I was slacking on my duties." He pushes away from the bed and gathers his clothes.

I hug my knees to my chest and watch him get dressed. I know he wants something from me but I don't know what. He knows my drive to pursue my education is equal to that of his for music. I want to be neuropsychologist one day—I want to help stroke victims and perhaps research Alzheimer's. I'm fascinated with the brain—it excites me in ways that I find it hard to explain. He's the poet, the songwriter, the one with the words.

Frustration simmers through my veins like a fuse about to explode.

He pauses at the door and looks at me.

What will he write about me one day, I wonder. He writes about everything in his life—everyone. Will I be the lost chance at love, the girl who he lost his virginity to, or the ex he hates? I know he will write about me—he already has and his songs are all about life and hope and angst and desire.

"I'll see you later then," I say lamely.

His brow furrows, making him look as confused as I feel. "Yeah, sure, just text me when you need me."

The door closes behind him. I stare at it for a few minutes without moving. I can't shake the feeling that my fear of letting everyone else down is preventing me from taking a risk.
Amazon
Barnes and Noble
iTunes
Books2Read 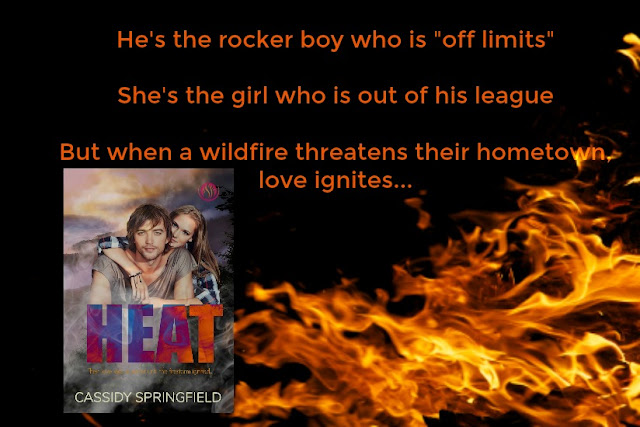