Was it all a dream? A guest author post by Author Tammy Dennings Maggy 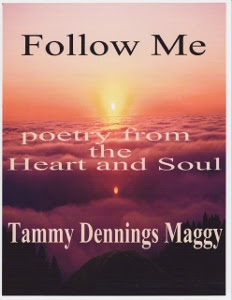 Thanks for having me today, Amber!  The last time I visited with you I talked about finding my soul mate.  The journey to get to where I am was far from easy. In fact, there was a time that I just wanted to give up and end it all, but something stopped me.  Call it a higher power if you will, but something intervened and said to just give my life one more chance.
Instead of staying in that dark room, wallowing in self-pity and heart break, I turned on a few lights and started writing.  I kept writing and pouring my heart and soul out onto the pages of notebook after notebook.  These notebooks held my life over the last two years. Two of those notebooks held my poetry.  Some of it was already there, the happy and in love stuff. What I had to add then was the devastation and heartbreak of going through first a divorce, then having my heart ripped out and shattered by someone I had loved for over 25 years.
Two other notebooks were the beginning of what became For the Love of Quinn (Now and Forever 1), the very first book I have ever published.  It’s the beginning of what I hope is a great series…well, I think it’s great!  LOL! I’ve filled several more notebooks with the scenes and timelines for all of my new characters.  All of them are bits and pieces of me and have helped me find myself again.
The collection of poetry is what really saved me.  I poured out all of my heartache and pain in those words.  I wrote about accepting that the man I had loved all of those years was just a fantasy.  I lost him long ago when he joined the Marines and fought in the first Gulf War.  The person who came back was not the same. We were wrong to think we could just pick up where we left off. Too much time had passed and both of us were different people then we were in high school.  Aren’t we all?
Once my heart accepted that, the anger flew out of me and onto the pages.  He couldn’t just let me go on with my life, he had to keep coming back and promising me things he could never deliver. That pain was brought out for all to see in those words and in so doing, my heart was able to start healing again.  It was far from being whole, but it was a start.  Just that small step opened the door for a friendship and a love that I never thought was going to be mine.

People would always say to me that I would find true love when I stopped looking. I used to think that was a bunch of baloney, but it’s actually true.  When Liam and I first met, both of us had come out of some nasty breakups and neither one of us was ready for a “relationship.” Before either of us knew it, we had fallen for each other.  It really wasn’t that hard. It felt like we had known each other for more than just this lifetime.  It was comforting and frustrating at the same time.  I wasn’t ready to hand my heart over to someone again to see it shattered.  I didn’t think I would survive a pain like that again. Both of us kept dating other people but still came back to each other time and time again.
I wrote some of my best poetry during that time of uncertainty between us.  I knew I had fallen for him and was scared out of my mind.  What I didn’t know was that he was feeling the same. The idea that we had finally found our soul mates scared us both to death, but the thought of losing one another was even more frightening.  At one point I had thought he didn’t feel the same for me and wrote about losing him.  He’s in the coast guard and longs to be at sea again, so I took that idea and ran with it.  It was that poem that lit a fire under him.  After her read it, something changed between us. He told me he never wanted to be apart again, that we belonged together.   I’d like to share that poem with everyone here today.  It’s in my self-published book called Follow Me: Poetry from the Heart and Soul.  Some people who have read this poem thought it was about a woman who has lost her husband at sea, that he died.  I didn’t intend for it to be that way, but I guess that is how it felt to me. I thought I was going to have to go on without him.
Was It All A Dream?
The waves crash on the beach
Pulling me out of a much needed sleep.
The bed we shared the days before
Was still warm where you laid next to me…
I reach out only to find empty space.
No sign of your sleeping face.
Eyes closed tight
Fighting the tears.
Remembering the same goodbye
Said so often through the years.
Clinging to each other
In the hours before you leave.
Hearts pounding together:
Touching kissing, committing all to memory.
Fighting the urge to just let you go.
Was it all a dream?
Promises made once again
To come home safe to me.
Smiles on our faces
Don’t make it to our eyes.
One last embrace.
One last kiss.
Hearts reaching out for one last plea.
The friendship, the love,
The soul wrenching goodbyes.
Was it all a dream?
Wrapped in one of your shirts
Still smelling of you.
Walking along the shore
The salty mist coats my skin.
On the horizon a distant ship
Starts to come into view.
And as always this is how
My journey without you begins.
Was it all a dream?
So won’t you follow me on my journey?  It’s really not all that unique. Others have followed paths similar to mine.  Some have found the light at the end like I did, and others are still searching.  No matter which one you are, keep putting one foot in front of the other because each day brings new light and new love. What more can you ask for? 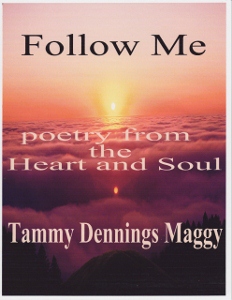 Click here to view Tammy's amazing book trailer for Follow Me on YouTube
Where to find me
Follow Me: Poetry from the Heart and Soul
Smashwords https://www.smashwords.com/books/view/118909
Amazon http://www.amazon.com/Follow-Me-Poetry-Heart-ebook/dp/B006WBPZL0/ref=ntt_at_ep_dpt_2
Behind Closed Doors (website/blog)
Not Enough Time in the Day (blog)
Facebook Author Page
Twitter http://www.youtube.com/watch?v=QCTBdkZU3eY
Posted by Amber Lea Easton at 12:32 PM

A poignant poem! I could smell the salt, feel the breeze and taste the tears.

Isn't she talented, Joe? Her poems truly speak to the heart. Thanks so much for stopping by.

Thanks again, Tammy, for sharing your soul with the world.

Thank you both! I love getting feedback about my writing, especially my poetry. It means something different to each reader and that amazes me.

So very descriptive and heartfelt....can really ,'picture' both your feelings and scene...the emotional backdrop of love and desire to be together. Great poem Tammy...Write On...well done. Keep shining in your life with Liam. D