Don't let appearances fool you.  Lauren may look camera ready, but her scars are both physical and emotional.  A stalker--someone she'd trusted like a younger brother--nearly murdered her one violent night and shattered life as she'd known it.  Forced to kill him to save herself, she can't quite justify that in her mind so she buries the memories deep.  As an anchorwoman, she's accustomed to reporting the news rather than being the lead story.  She flees to her brother's home on Grand Cayman to escape the spotlight, to figure out how to start over and to distract herself from the nightmares that torment her.

When she meets sexy screenwriter and dive master Noah Reynolds, she feels "normal" for the first time in months.  He looks at her with desire rather than judgment.  He's easy to be with...and to flirt with.  He makes her laugh, which is an accomplishment after all she's survived.  In Noah, she senses a kindred spirit, someone who's as alone as she is, who's had more than his fair share of sorrow, someone who accepts her as is--scars, baggage and all.  He's the distraction she's been needing. 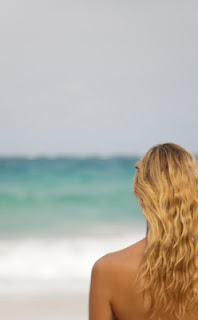 But she doesn't know that Noah's not all that he seems.  His laid back island demeanor hides a past he'd thought he left years ago.  He has a stalker of his own, someone either pretending to be his dead fiancee...or maybe a fiancee who isn't as deceased as everyone had assumed.  Either way, there's a woman on the island who doesn't want Noah to live happily ever after and Lauren's caught in the middle.

Lauren doubts herself...is the paranoia she's experiencing justified or a carryover from her past?  Has she finally lost it?  Is she strong enough to stand with Noah or will she run again?

Trust isn't easy for her.  She'd trusted the guy in Atlanta, too.  Now, more than ever, she needs to trust herself first and foremost.  To do that, she needs to finally face the buried memories and confront the here and now regardless of how unpleasant that might be.

Heart thudding in her chest like steel drums, she jolted awake, and blinked at the stars glaring at her from the open hole in the ceiling. She froze with fear, every limb paralyzed, breathing labored. Someone watched her from the foot of the bed. She could feel their gaze on her...on them.
Noah slept next to her, completely unconscious judging by the steady rise and fall of his chest and the weight of his arm over her abdomen.
Look. It’s my imagination. No one’s there. I double-checked—no, triple-checked—all the locks before bed.
Her thoughts immediately went to the morning before...the blackout, the pictures, the fear. She exhaled slowly and raised her head.
A woman stood at the foot of the bed, hair hidden by a yellow scarf, face in shadow, dressed in a baggy sweatshirt and jeans. Real.
“Who are you?” She bolted upright, eyes wide as the woman turned and ran from the room.
Pushing Noah’s arm aside, she bolted from the bed. Anger replaced fear in an instant. Unable to control the emotions raging through her bloodstream, she ran into the living room. No one. She’d left all the lights on before going to the bedroom. She turned in a circle, plastic from the still unfinished kitchen crunching beneath her feet.
The deck door remained closed and locked. Nothing appeared disturbed.
Heart still slamming against her ribcage, she walked to the top of the stairs leading down to the laundry room. She took one step...and then another...slowly...unable to breathe until she reached the bottom. All the deadbolts remained locked.
No one had left.
She flattened her back against the wall and looked over her shoulder toward the top of the stairs. If no one had left, then the woman had to still be inside.
Ali? Alicia? Someone pretending? Questions rattled her mind as she ascended the stairs with her back kept firmly against the wall. She wanted to call out to Noah, but her voice lodged in her throat.
Once in the living room, she again checked the lock on the sliding glass door before staring down the hall toward the spare room she’d never entered. Fear battled anger until she thought her head would explode from the pressure of the two heated emotions.
As she passed the bathroom, she flicked on the light to make sure it was empty inside. It was. She pushed open the door to the spare room with her foot as she kept her back pressed against the door.
Dark. She slid into the room, her hand moving along the wall for a switch of some kind.
Then she heard footsteps behind her. Slow. Creeping.
“What’re you doing?” Noah asked from where he stood in the open doorway.
He flicked on the light, showing the room to be empty except for piles of boxes and tools. She stared at the open window at the far side of the space.
Without answering him, she walked over the mess and leaned out the window. Palm trees swayed with the night wind. Shadows danced in the darkness, black on black. In a moonless sky, stars fell toward the dark void where the ocean lay.
“Lauren? Are you sleepwalking or something?” Noah’s hand dropped against her shoulder.
The truth of what she was seeing warred with the knowledge in her heart that someone had been standing at the foot of the bed. The intruder could have escaped out this window. It wasn’t a long drop for an athletic person.
I’m not going crazy, I’m not. God, I hope I’m not.
She shoved the window closed with more force than necessary and latched it. When she finally faced Noah, she felt like someone dancing on the edge of a cliff in the darkness, someone about to take a free fall into the abyss.
“I didn’t mean to wake you,” she said, her voice husky with emotion.
“You look terrified.” He smoothed her hair back from her face, his thumbs caressing her cheekbones. “Did something happen that scared you?”
“You look better.” She flattened her hands against his chest and forced a grin. “How do you feel?”
“Hungry.” His grin reassured her that all was well in the world. “Want an omelet?”
She smiled and let her hands trail down his chest. Maybe she’d been dreaming, after all. Yesterday had been more than a little stressful.
“I hear you make the best omelets on the island—”
“In the world, actually.” He winked. “World famous omelet.”
“World famous, yes, of course, how could I resist?” She exhaled the nervous energy that still zapped through her system and leaned into him. The man had a way about him. There was no denying it. 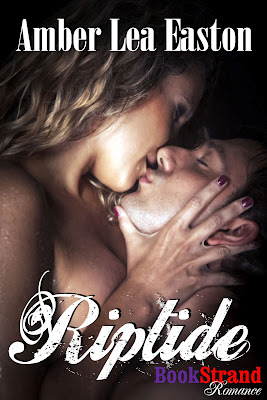 “You can’t resist me. I’m like a drug.” He glanced behind her toward the window she’d forcefully closed. “Want to tell me why every light in the house is on and why you’re in here closing windows at three a.m.?”
“Not really.” She linked her hands behind his waist and looked up at him. “I like being here with you in the middle of the night, think I’ll make it a habit.”
He squinted at her, obviously curious about the reason behind her madness. Again, he glanced toward the window but said nothing.
Habit? Had she actually said that word? There’s no way she could stay here again, probably shouldn’t be here now, not when she was having blackouts, chatting it up with creepy redheads and hallucinating women standing at the foot of the bed. She’d successfully gone from one nightmare into the next and could no longer distinguish reality from fantasy.
She cringed when he looked away and turned off the light. She was such a liar, a dirty, rotten liar. A hypocrite. A fraud. She needed to control herself and slow this down before they both got in too deep.
Riptide--Available AT A DISCOUNT for pre-order now in all ebook formats directly from Bookstrand.com. Official release dayAugust, 1, 2012
Posted by Amber Lea Easton at 11:45 AM

This is very attention-grabbing, You are an overly
professional blogger. I have joined your rss feed and stay up for
in the hunt for more of your magnificent post.
Additionally, I have shared your website in my social networks
my site :: cheap Letterheads