It's Sexy Saturday here on Kisses, Caresses and Whispers in the Dark! Woot! I'm welcoming back guest author Elodie Parkes where she's sharing a sample of her novel, Two of Them. 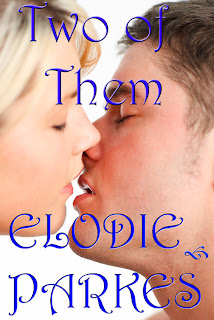 Two brothers alike in a crucial way and not alike at all in others, both looking for love. Named after characters in one of their grandfather’s gritty spy novels, Jet and Falcon wonder if their often absent father is a spy.
Kind hearted Jet feels trapped in a job he doesn’t like.
Dynamic, creative Falcon loves his work.

Jet longs for something different in his life. When he meets Emma, he thinks that after their night of delightful lovemaking he has found it. He longs to see her after that night. Does she feel the same?

Jet begins to change his life, but it’s worrying and time consuming. His luck is about to change when Annabel kisses him in the local pub garden. Her sexual advances at first shock Jet until he lets himself relax into her passionate ways.

Jet has inherited a cottage from his grandfather, and as he clears out the garden shed what he finds there turns his ideas about his own family upside down.
Jet along with his brother Falcon decide to find out the secrets that have been hidden from them. Was their father a spy after all?
As Jet and Falcon start to unravel the secret life of their father, they realize that love is more important to them than they could have imagined, and Falcon finds what he wants.

An excerpt of Two of Them
On Friday morning Jet was already nervous about the meeting with Emma that evening. The day seemed to drag along, and he couldn’t eat lunch even though Melanie had been out and bought his favorite BLT sandwich along with lunch for Craig and herself.
He left the office earlier than usual that evening and sped home having arranged with Falcon to handle his own work transport that day. Jet stood for a moment in the shower leaning with one hand against the wall, the water coursing down his back as he reprimanded himself for being so nervous. He dressed in his most presentable jeans and a chambray shirt, which enhanced the blue of his eyes. He ran his hand through his hair as he dried it and then left for the hotel.
As he parked in the hotel car park, he looked around for Emma’s sleek gray car. He couldn’t see it and he experienced a momentary panic. What if she didn’t come, he asked himself, and then he locked his car and went into the front bar where he could be sure to see her arrive.
He asked for tomato juice when Dan, who had worked in the hotel for as long as Jet could remember, asked him in his friendly way, “What’ll it be Jet?”
Jet angled himself so that he could watch the door without it being obvious, and when after ten minutes Emma arrived he sighed with relief.
She walked straight up to him smiling and lightly kissed his cheek.
“Sorry to be late Jet the traffic coming out of the city was naturally horrendous. How are you?” She seemed to be so confident and at ease that Jet felt a little inadequate. He smiled back at her.
“Good yes and how was your office hunting?” He heard himself say as he noticed she was wearing a little more eye makeup than when he had first met her. It looked good and made those pretty, blue-green eyes look even bigger. Her lips were a different shade of pink too, like crushed raspberries. Jet asked her if she would like a drink, but instead they ordered food and went to the restaurant area to wait for it. Jet found them a table by the window, which looked out onto the climbing roses that were a profusion of different shades of cream, and yellow, on the lattice fence outside.
They looked at each other for a moment and Emma felt a flutter of desire as she noticed how well Jet’s shirt fit across his chest, and how his blue eyes seemed even more blue than she remembered. Jet swallowed as he saw the desire in her eyes. She wanted him it was obvious, and he felt an answering warmth low in his stomach.
Although they talked about Emma’s work and her quest to find premises for her business, their eyes gave other messages. Emma wanted to kiss Jet, and he wanted to hold her face in his hands and kiss her back. Emma wanted to run her hands through his clean, dark hair, and Jet wanted to take the tortoiseshell comb from her hair and have it tumble down over his bare skin. Emma wanted to unbutton his shirt and trace her fingertips over the muscles of Jet’s chest. Jet wanted to push down the sleeves of Emma’s dress and expose her creamy shoulders to his soft kisses. By the time they had coffee they had decided to give it a chance.

She loves animals. She  trawls through antiques fairs and treasure markets just for fun. She reads all the time, many kinds of genres but mostly ebooks now. Loves her iPad, loves computers, and has five! Studied the arts, business, and ICT at University.
Elodie loves music, and sings along all the time, the only two types of music she doesn’t like are jazz and rap. Elodie likes to travel but doesn’t do too much. Two of Them has the two brothers travelling across the world to the last place Elodie went on holiday herself.

Find more excerpts to read from Elodie’s books and WIP The Last Time on her blog http://elodieparkes.blogspot.com
Posted by Amber Lea Easton at 8:49 AM

Great interview! Thank you for giving us insight into the alluring Elodie Parkes.