It's the first Open Mic Monday of 2013!  Can I get a drum roll please?  Today is a quick feature of Tabitha Foster's new release, "Short Order Daddy, Surprise Billionaire" via CBLS Promotions.
Enjoy the blurb and excerpt!
(Unless otherwise stated, Open Mic Monday is not an endorsement of any particular book or author, simply a forum to help promote fellow authors.) 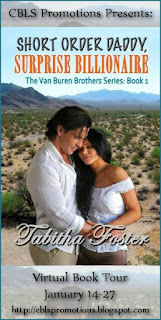 Blurb:
Stranded on a sweltering Arizona roadside, billionaire CEO, Max Van Buren, is rescued by the gorgeous, independent, and sometime tow-truck driver, Allie. For several years her life has been devoted to raising her young son and running a very successful restaurant. When she offers the seemingly down-on-his-luck traveler a temporary job, she may not want to resist opening her heart for much longer. 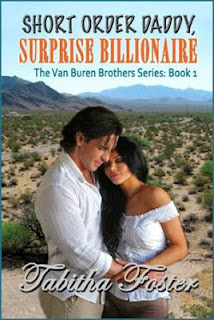 “Piece of junk!” he exclaimed kicking the tire of his steaming rental car in frustration. This is what he got for renting a car from some place called Rent-A-Deal. The luxury convertible he had ordered for this trip had been mistakenly given to another customer, and all rental car places in Phoenix were booked due to ten simultaneous conventions except for...you guessed it...Rent-A-Deal which specialized in rental cars that had passed their prime many years earlier at other companies. If Max was going to continue with his trip, he had to have a car...any car. So, the 2001 Corolla seemed reliable enough at the time.

Now, he stood along a deserted highway in northern Arizona right smack in the height of summer. Max couldn't even begin to guess the temperature out here. He took off his sweaty t-shirt, wiped his brow with it, and tied it around his waist. He looked at his watch. When he called them, his auto club had said a tow truck should have been there ten minutes ago.

“Stupid idiot,” Max muttered under his breath. This whole plan had been his own cockamamie idea to get back in touch with “the people,” to find out where his company went wrong, and to see where they could inject new energy into their restaurants. But it looked as if things would be a bust from the word “go.”

His family, the Van Burens, owned a chain of Mexican restaurants called Tio Jose's, or TJ's for short. The initial business had been started by his Mexican great-grandfather, Jose Hernandez Gonzalez, who sold fresh tacos from a cart in Los Angeles before upgrading to a small stand. His daughter was Max's grandmother, Carmen Santana, a woman said to be so beautiful and voluptuous men would skip a breath at the sight of her. She married Carlson Van Buren, much to the moneyed Van Buren family's shock and dismay. When great-grandfather Jose died, Carl Van Buren suddenly noticed how successful the little taco stand had become and additional dollar signs flashed before his eyes. Carl, with Carmen's blessing, took the initial restaurant idea and turned it into what would become a 200 location national restaurant chain specializing in mid-priced Mexican food, using Jose's old recipes of course.

Years later, Max had inherited the CEO position, but under his watch and with the downsizing economy, TJ's had begun to lose ground and fast. At the last board meeting, Max had been told to turn things around quickly or expect to be replaced.

Maxwell Van Buren, thirty-two years old, six foot two, dazzling smile, well-defined body and charm that could talk a Catholic nun into giving up her habit had never grown accustomed to failures of any kind. Failure had simply not been a word in his vocabulary. He sure as hell would not start now. After studying piles of customer survey data with his younger brother, Stuart, Max noticed a trend. Customers felt that TJ's offered nothing special that could not be found anywhere else and for a cheaper price. The customer service rating also left a lot to be desired.

That's when Max had what he hoped would be the saving idea to turn things around. He gathered a team of assistants to research small-town Mexican restaurants that were thriving, even in this economy. He wanted to see firsthand what these establishments were doing that his big chain company didn't do. No contracted out research company for him. Max wanted to get into the nitty-gritty himself.

A one-week trip with ten stops through Arizona, Nevada, and California was planned. Max instructed his staff to only contact him in an emergency and left everything else in Stuart's hands. He wanted to have a clear head during his expedition. He wanted to see what was needed to bring the heart back to TJ's and its customers back to the dining room.

“So much for careful planning. And I wanted to get into the nitty-gritty…,” Max said to himself, glancing down at his watch, feeling hot and tired.

He hadn't even made it to his first stop in Primrose, Arizona.
Finally, in the distance, he saw a tow truck approaching.

“About damn time,” he growled, his mouth feeling as dry and rough as the surrounding landscape.

The tow truck skidded to a stop behind his Corolla and to his utter surprise, a tall, alluring Latina, with long curly dark hair hopped down from the bed of the truck. She wore a green t-shirt which read “Find THE Flan at Tia Maria's” and a pair of worn jeans. She sauntered up towards him and called out, “Having some problems?”

About the Author:
Tabitha Foster grew up in the Santa Barbara wine country and not far from the beautiful Pacific Ocean coastline.  She currently lives in the Los Angeles area and is hard at work on the next installment in the Van Buren Brothers series.

Thanks for being my guest today, Tabitha. Sorry for the delay in getting your feature up--tech gremlins are seriously messing with my mojo lately. I hope you accept my apology. I wish you much success with your novel.--Amber Lea

Thanks so much, Amber! I appreciate you having me on your site today.