Oh, the places I'll go if you tell me no. #amwriting #creativelive #creativity #life

"The author shouldn't have gone there."---a recent comment from a reader of mine about a controversial storyline. Hey, whatever. It's not your cup of tea, fine. I honestly don't care. I'm not one of those authors who obsesses over reviews. Love me or hate me, it's your prerogative. Seriously. But the term "shouldn't have gone there" resonated me for other reasons. I mean...who are you to tell me how far I should go? I will go where I choose in both life and work because I am first and foremost a creative person.

Even as a kid, I'd be the one who found out what the rules were so that I could break a few. If you tell me I can't do something, I will go out of my way to do it. Am I a brat? Probably.

But because I push the boundaries, I live a nonconformist life. I don't work in a cubicle or keep 'normal' 9 to 5 hours. I take risks that sometimes end up as failures, but I never regret them because I can say I tried my best.

Don't go there? I'm a writer, it's my job to go there. It's my job to delve into the darkness of the human heart and the shadowy parts of life to illuminate them in a way that makes people pay attention. I write romantic thrillers so some think that the word 'romance' means lighthearted glee. Well, not in my stories, although I do try to temper the drama with humor here and there--and a lot of sex. I mean, the characters need to blow off some steam after all that suspense, right? But I'm more than willing to push the boundaries of the genre. I explore the mind of stalkers, human traffickers, murderers, wounded Marines with PTSD, drug addiction, dangers of being locked up abroad where torture happens, witness protection, kidnappers, co-dependency...you get the idea. I'm not afraid of the dark side of human nature. I definitely go there and I do so without apology.

Here's what I say to people who keep trying to put limits on others: Stop trying to infringe your narrow world view on those who dare to put themselves on the line. This isn't just about writing, but in regards to all things. Simply because you're afraid to take a risk, doesn't mean that those who are out there risking it all are wrong.

Each of us is different. We all have lives that have shaped our fears and dreams. When we start respecting those differences rather than criticizing them, that's when true magic happens. That's when we realize how fascinating we all are because of the various experiences we bring to the conversation. When we stop fearing and start accepting, we become better human beings who might learn something if we take the stick out of our asses long enough to sit down and listen.

I admit that I've become intolerant of being censored--professionally, yes, but especially personally. Guess what? I go there all the time. If I have an opinion, I express it. But here's the thing...I welcome yours. I want you to go there, too. It makes you much more interesting in my eyes if you're not afraid to be your irreverent, sassy, kind-hearted, genuine, outrageous self.

History is filled with individuals who broke a few rules, who busted free of the status-quo, who went boldly over those lines people like to cling to for their own safety, and who gave the finger to anyone who tried to hold them back.

So as for the reader who thinks I went too far...and my personal critics who attempt to reign me in...I probably haven't gone far enough and, if given the chance, I'll blow your fucking mind with how far I'm willing to go.

Go ahead...say it...tell me what I can't do...try to put a limit on my imagination or my potential...I dare you. 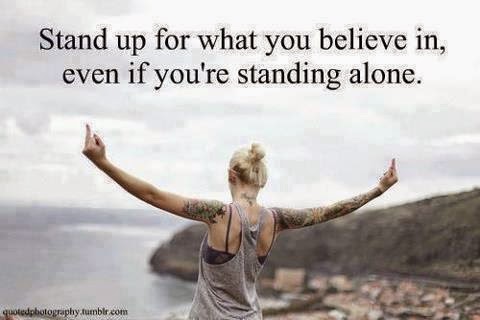 Love your blog post! Yay to those who live out side of the fucking box!